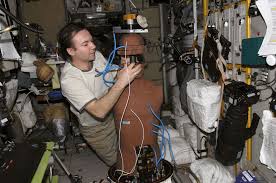 Astronaut Yuri Lonchakov resigned. He said he found a better job. Let us see about the transits and progressions for now and let's find the 'helicopter view' or 'cosmic awareness' in his natal chart of March 4, 1965.

JUPITER-URANUS
The combination of Jupiter-Uranus is the combination of cosmic awareness (the helicopter view, seeing things from a higher perspective). That is why this combination is so prominent in the charts of astronauts, astrologers and some modern popes.  It's not different in the chart of Russian astronaut Yuri Lonchakov. His natal Sun in Pisces is opposition Uranus and in minor aspect with Jupiter (a 67.5 degree half sesquisquare aspect).

URANUS-PLUTO
Saturn rises before his Sun and is conjunct Sun. First of all he is ambitious, cautious and serious. That is hardly in line with the hectic and impulsive Uranus-Pluto conjunction. But, right now Uranus is square Pluto. It is a wake-up call for the natal aspect. It is time for a change...


PLUTO = MARS/URANUS
Lonchakov's Pluto is on the midpoint Mars/Uranus. He was born with Uranus conjunct Pluto. Both Uranus and Pluto are opposition his natal Sun. These aspects tell us about urgency, turbulence and sudden measures. Maybe it is also the kind of aspect combination for a man who needs some stressy, risky and new excitement from time to time.


T&P
Progressed Mars is opposition Saturn: there is a dead end (he quit)
Transit Pholus is square Node: there is a turning point in his network
The Progressed Sun changed sign to Taurus: his life style changed
Transit Neptune is conjunct Venus: there is some kind of financial or romantic thing going on
Transit Uranus is conjunct progressed Mercury: accelerated decision making (a sudden idea), unusual  decision. (In the progressed chart Mercury is inconjunct Uranus)

This all doesn't explain why he said that he found something more exciting to do. But it certainly shows that what he said (Mercury) surprised others (Uranus) when he stopped (Saturn) working (Mars).