The love life of Frederick William II of Prussia was rather complicated. He married, had 1 child, divorced, married again and had 6 children. Meanwhile he had 7 children in two morganatic (bigamist) marriages and with Wilhelmine Enke, his official mistress. This is his portrait. It seems that he had a more than average BMI. 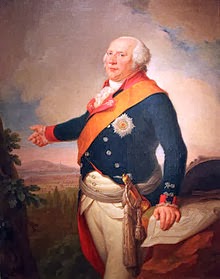 Charts show us what we know of people. He was thickset and burly, very clean (body and house). Let's see what his chart says.

ART
The astrological pattern of artistic talent is (as you may see on Art&Astrology) a mixture of aspects between Moon, Venus, Neptune and MC, together with placements of these 4 components in the signs ruled by Moon (Cancer), Venus (Taurus and Libra) and Neptune (Pisces). Frederick William II had Sun in Libra, Moon in Taurus, Venus in Libra, Neptune in Cancer. Venus was square Neptune and inconjunct Moon. The Moon was sextile Neptune. Neptune was sextile MC. That is a complete pattern. He was a talented cellist. Beethoven and Mozart enjoyed his patronage. 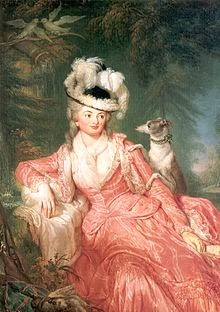 WOMEN
Often, the romantic nature of the artist leads to love adventures. The same fantasy, ideals and visions that help an artist to create something that we love, helps him or her to be involved in love affairs. In his chart, symbols of women are of crucial importance. Consider his mighty position as a monarch ...and you know the rest.

1. The Moon is on the Descendant. That is an important position for the Moon in Taurus. It means that his needs were important, too. As the Moon is one of the symbols for women, women are important (according to the chart).
2. Juno is on his MC. Juno is the symbol of the married woman and of marriage. An angular Juno signals the importance of marriage and women in general. MC with Juno links his reputation to his marriages.

Venus square Neptune is one of the 4 aspects that appear to be frequent in the charts of divorced men.

OVERWEIGHT/BURLY
A Taurus Moon square Jupiter (longing for a lot, habit of overeating) and a fanatic Scorpio Ascendant make it harder NOT to eat. In 'Obese and astrology' on Astromarkt I mention these and other astrological factors to blame...but maybe Ceres trine the Ascendant also eases the access to food.
The Scorpio Ascendant is conjunct Pluto opposition Moon and square Mars. This intensifies needs and energy. He had enough of both for all the ladies in his life:).

MISTRESS
He was a Libra born September 25, 1744. Wilhelmine was born on a December 29, 1753.
Here is his chart. The 'transits' are for the day of birth of Wilhelmine Enke. Their charts don't seem to 'match' much.

chart of Friedrich Wilhelm II and position of Wilhelmine Enke

SATURN IN VIRGO
Last but least: Saturn in Virgo rises before his Sun. He was first of all the son of his father, someone with a position in society. Virgo is the clean sign. Perhaps this position of Saturn and the Moon in the sixth house contributed to the need to wash himself, get rid of carpets and keep the air clean?

LINKS
On divorce in the chart: http://astropost.blogspot.nl/2013/03/divorce-in-chart.html

On Moon-Pluto and crime: http://astropost.blogspot.nl/2009/02/moon-pluto-in-charts-of-homolka-and.html