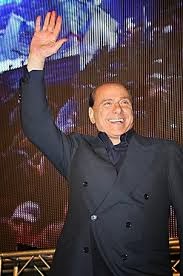 In 2009 I wrote about reading Silvio Berlusconi's natal chart. Later, the time of birth according to Astrodatabank was 5:40. So here is a new version. Can I find Berlusconi in his natal chart?

WHO IS BERLUSCONI?
Silvio Berlusconi's father was a bank employee. Berlusconi is now an important politician and a convicted tax evader who owns A.C.Milan and many millions.

When he was young he worked on cruise ships, to entertain people (as a musician). He composed music and wrote books. He founded a construction company in 1961 (when his sun sign changed to Scorpio) and in 1978 (Progressed Sun trine Saturn) he founded Finivest. He earned a lot of money. In 1994 (P Sun trine Eris) he entered the world of politics and managed to become Prime Minister for just a few months. It is easy to see the artist in the chart (the combination of Moon in Pisces and Sun in Libra, with Neptune rising before the Sun and in a wide opposition with Venus

Today it is his birthday and it is shortly after the ministers of his party resigned. Here is the chart with transits and progressions. Transit Uranus and transit Pluto are in conflict with his Mercury now. In the natal chart Mercury is inconjunct Uranus AND quintile Pluto. No wonder that he and his party are hot news, again!
READING HIS NATAL CHART
I use the 3-step method described on my site Astromarkt: http://www.astromarkt.net/chart-analysis.html
until it is enough to see Berlusconi in the chart:)

1. ASTRO ID
(Just like in your passport: what makes you different?)

The Astro ID of Silvio contains Neptune  (rising before the Sun), Pluto! calling (no aspects in sign and orb 5 degree) and the Northern Node (opposition MC). The combination of Neptune and Pluto is the combination of the 'silent or secret force'. Illusionist, madame Blavatsky and mystery writers, but also spies have a prominent Neptune-Pluto combination mirroring discretion, secrecy, keeping secrets and being mysterious. It is a combination that has often been linked to the paranormal, too. When Neptune rises before the sun you may expect a belief or ideology that comes before all. A 'calling' (not aspected) Pluto  (quoting myself) means:

Pluto is seeking challenges and influence by using force and authority or values (money). Strong men (with or without muscles) have unaspected Pluto's, but Pluto is also 'calling' those who do dangerous work or they work where strategy is needed (in politics, for example).
The nasty side of a 'calling Pluto' is that you need more and more power and can't resist the challenge to prove how strong, powerful and rich you are. In certain cases this is too dangerous (for the person or for others).

The important angular Northern Node is reflecting the importance of the community (from family to nation).

One more striking thing is the position of Midheaven. Venus is trine Midheaven, but out of sign. That means that the MC is 'calling' and the position in society could reach any possible level (top or down), somehow/anyhow.

The Astro ID of Berlusconi is that of a believer/idealist using tactics and strategy at any possible level (perhaps in politics) and whose special status (IC/MC) has a strong connection with groups of people (either way).

2. CHARACTER
A. Elements
Most of the 10 most important planets, Sun and Moon are in water and movable signs. That makes me think of Pisces (the movable water sign), the sign where his Moon and Saturn are. Pisces rules the 7th house and Neptune (ruler of Pisces) rises before the Sun. Pisces/Neptune = the media. Elementary, Berlusconi 'goes - and bends! - with the flow'. Pisces is also an artistic sign and the sign of the sea. That is where his career started.

B. Sun-Moon-Ascendant
Sun is in Libra quintile Jupiter (creative ways to 'be great') and half sesqui square Pluto - 67.5d (a combination for success and confidence); Moon in Pisces' narrowest aspect is the sextile with Uranus (need for excitement), Ascendant Virgo is sextile Pluto (easy way out of problems and challenges). As this Pluto is prominent (see Astro ID), circumstances and situations (Ascendant) made it easy (sextile) to dominate (Pluto).

As Sun/Moon midpoint is in Sagittarius, opposition Chiron in the ninth he is motivated by opinion making.


We see a man with a romantic or creative nature, self confident, with a need for excitement. He finds himself in a situation and has the opportunity to present himself (Ascendant) as a strong man (using power, influence and money) to reach any position possible (MC is calling!), motivated by opinion making.

C.  What more does it take? Expect for that Mercury inconjunct Uranus aspect that brings him in the news again and again...?


1. On the day of birth of Berlusconi (September 29, 1936) Mercury was inconjunct Uranus for all new babies. So, what didn't change with the hour of birth, was the inconjunct between Mercury and Uranus (see: http://astropost.blogspot.nl/2009/02/mercury-inconjunct-uranus-in-chart-of.html ). This aspect is a sort of a guarantee for political incorrect and upsetting opinions. Mercury rules his Midheaven in Gemini. For a man who worked with news items, this aspect was even more important.

2. The transits and progressions for one of the days of his trial remain the same, as I used the 5:40 chart then: http://astropost.blogspot.nl/2011/04/berlusconi-transits-progression-and.html

3. I wrote about the Venus-Nessus issue related to 'Ruby' : http://astropost.blogspot.nl/2011/03/venus-nessus-in-scorpio-berlusconi-ruby.html

4. On the broken marriage of Silvio Berlusconi: http://astropost.blogspot.com/2009/04/famous-couple-silvio-berlusconi-and.html

5. The moment of winning elections in 2010: http://astropost.blogspot.nl/2010/03/berlusconis-winning-chart.html

On not aspected (calling) planets:
http://www.astromarkt.net/unaspected-planets-and-missing-elements.html

6. On Neptune with Pluto: http://astropost.blogspot.nl/2008/06/neptune-and-pluto-combination-of-silent.html