His daughter is in coma, with little chance to recover. No birthday celebration yesterday for father Bobby Brown. I wrote about his chart and life before ( http://astropost.blogspot.nl/2010/04/bobby-brown-lives.html ) so I will limit this post to the transit and progressions relatd to his sad situation. Look at transit Saturn ruler 1, opposite Progressed Moon in V (house of children), for example. This is a sign for sadness, in most cases.

Of course, Bobby Brown's chart has more indications at the same time, or else it wouldn't be that bad. Transit Pholus on pr MC, for example, refers to a turning point and transit Pluto near AC mirrors stress. There are benefics as well, coming from Saturn. Saturn ends, Saturn earns respect and Saturn is the symbol of parenthood, too. In short, the chart tells us about worries for others or because of others (Moon opposite Saturn) with stress and intensity around (Pluto-AC) at a turning point in family or social status (Pholus-MC). It is not so that the chart is predicting anything. The chart is just in line with the feelings right now. 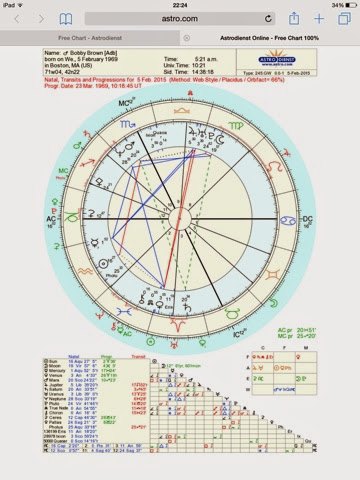 Daughter Bobbi Kristina Brown has Neptune in 8, just like her late mother Whitney Houston, who drowned in a bath. It seems that Bobbi couldn't live with the death of her mother. On February 2 I tweeted about her chart:

It seems that Bobby Brown had a sort of a birthday dinner with friends anyway...much criticism asca result!