Chart of the day of birth of an American sniper 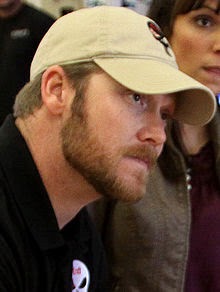 The chart of the day of birth of Chris Kyle (born April 8, 1974 in Odessa, Texas) contains the material to make a sniper. I will show you how.

Of course, not every person born that day became a sniper, but in certain circumstances and situations, with the right gender and health, they could have been that person. I’ll tell you where in the astrological positions on that day, the sniper is. The hour of birth is unknown, so that the angular positions are missing, as well as the right degree of the Scorpio Moon. But, Scorpio Moon IS a courageous moon position, as I mentioned before on this blog.

As he was born under Aries, with that Scorpio Moon, we get a Martian character, moreover because his Mars is Out of Bounds, drawing attention to activity, energy, manhood, arms, men, work, iron and all other things that are part of the astrological symbol Mars.

What more does it take to become a soldier in war times? I think it takes discipline, courage, a sense of adventure and Mars-Saturn-Pluto for the issue of untimely death. He’s got it. I already mentioned Scorpio Moon with Sun Aries; there is Mars trine Uranus and there is Saturn semi square Mars/Pluto.

It is not just because of his chart that he became the most lethal sniper in history. As a child he got his first gun and he was a hunter from that moment on. That was with progressed Sun opposition Uranus (for a change in life and lifestyle started by other persons).

He died with a progressed Sun-Uranus aspect, too. When he was murdered his Sun had progressed to the 27th degree of Taurus, inconjunct his natal Uranus. This makes me think that Sun/Moon midpoint was opposite Uranus at birth (so that his birth was in the first hour after midnight, but that is just speculation).

On the day of his death, February 2, 2013, there was also a quindecile (165d) of Progressed Sun and Transit Saturn. The Uranus inconjunct and Saturn quindecile are mirroring, by means of minor t&p’s, the sudden and unexpected event with a loss involved with a very frustrating ending.

This year, 2 years after death, with transit Jupiter trine his Sun the Texas Governor declared February 2 to be ‘Chris Kyle-day’. Jupiter’s trines make a person either more confident and happy or successful, even after death.

It is a fact that the story of Chris Kyle is the story of a hero for one and the story of a murderer for another. Astrology and charts don’t judge. Charts simply show us the potentials. In the chart of the day of birth of Chris Kyle there is a potential for a sniper or a hunter and for a sports man, too. There is more in that chart and there will be even more in a chart with an hour of birth, of course. More famous people were born on April 8,1974, like a medal winning orienteering competitor and an author. It makes a difference where you were born, how you were educated and built, what you do with the potential in your chart. Kyle worked as a bronco rodeo rider, but he hurt his arm and that was also the reason why the Special Forces were his only chance to work in the army. He became a SEAL.

A Sun Aries, Moon Scorpio character (will to win) with Jupiter rising before the sun (for the international), a Mars OOB (for the importance of being a man, of arms, of competing) is now has the starring role as the main character in a film (http://en.wikipedia.org/wiki/American_Sniper_(film) . His ‘calling’ Sun (without major aspects in sign) already told us that he’d draw attention, somehow, anyhow, some day.

PS
His autobiography was published with Progressed Sun sextile Mercury – communications highlighted - in that year. Mercury inconjunct Uranus in the natal chart mirrors how his story shocked people.