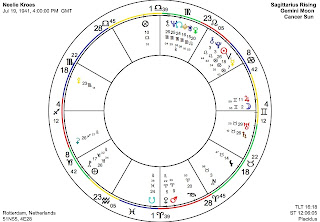 Late Dutch astrologer Gielen had a magazine named ‘ Sagittarius’. A reader of my blogs found the hour of birth of Neelie Kroes, European Commisioner for Competition since November 2004, in a 1986 edition of the magazine! Here is the chart. Transit Pluto is now square her Midheaven and Saturn is conjunct the MC! She would like to continue her job, but her party is not represented in the Dutch government and there are of course other candidates waiting! With Saturn and Pluto we often see the nasty sides of politics, but sometimes also the ‘ die hards’ . For more about the effect of Saturn and Pluto, see Astromarkt. Fact is that she did a good job in the EU and who managed to be in charge the right way (Sun sextile Saturn, narrow aspect, click the link for more about management and Sun-Saturn)

Look at Mars in Aries, leading the bowl in her chart, and watch the position of the angular Moon in Gemini, Jupiter (the international) rising before the Sun, Venus (on Sun/Moon) in the ninth house and Neptune on top and you see a person who loves to be an international and travel around and who has fans and followers, too.
The Moon is on the Descendant makes her ‘ touchy’ and sparkling according to the interpretation of Dear Brutus (recommended article! on http://www.dearbrutus.com/angularity.html....