The two days of birth of Khalid Sheikh Mohammed

Khalid Sheikh Mohammed probably was the leading figure of September 11. He is in New York now, facing the judge.

There are two possible days of birth given. Both days have strong Mars-Uranus influences. Yes, I thought that it might be easy to find the terrorist and the correct date of birth by looking at the positions of Mars and Uranus. You know that there are many examples of ‘ freedom fighters’ and ‘ terrorist’ with a prominent Mars-Uranus in their chart (see my site Astromarkt about the effect of Mars-Uranus with various examples). Piece of cake? No! I found that both dates of birth (March 1, 1964 and April 14, 1965) might fit! Perhaps one of the named days is his birthday and the other one is the day of birth of a co-fighter?

THE PISCES KHALID SHEIKH MOHAMMED
I started with looking at March 1, 1964. It seemed a good day of birth for a man like him, because on that day:
- Mars was rising before the Sun and conjunct Sun (reflecting the man who is first of all a fighter, an activist or soldier if not an athlete)
- Mars was opposition Uranus (reflecting the hurry to make changes, and the free fight - not in a regular army)
- Saturn in Aquarius Is not making Ptolemaic aspects within 5 degrees (the theme of breaking free or limited freedom, in line with being captured)
- The Sun opposition Pluto is the reflection of making life difficult for yourself and others because of fanatism and: of wanting to be an authority.
Correct. However, he was captured on March 1, 2003, in the year of progressed Sun conjunct Jupiter! Unless I should read this as the journey of his life (going across the ocean) - and wouldn't that be a rather cynical effect of Jupiter - this can't be his chart, I thought.

THE ARIES KHALID SHEIKH MOHAMMED
So I switched to April 14, 1965 and found:
- Mars conjunct Uranus (orb 2,5 degrees) and
- Mars opposition Saturn (orb 4 degrees; the issue of death and of taking hard measures).
- The midpoint Mars/Uranus is sesquisquare the natal Sun, a confirmation of the possible rebellion.
- The Sun is sesquisquare Mars (frustrated anger)
- Saturn in Pisces is opposition Uranus and rising before the Sun (for the urge to break free)
- Finally: Jupiter is ‘ calling’ (and didn’t he have international connections?

1999
Since 1999 KSM was a leading militant. The Aries KSM had progressed Sun trine Mars in 1999 (a perfect reflection of a leader in a war). The Pisces KSM would have progressed Sun semi square Mercury in those days. And perhaps that was significant for his lifestyle in those days, who knows.

CONCLUSION
Seesaws and Libra Moons...
Perhaps one of the days of birth belong to KSM and the other to one of his mates?
Could one of these days be his date of birth, in spite of the seesaw pattern that should implicate the person able to compromise and in spite of the Libra Moon (though they could have been born at night, having a Moon in Virgo of course)? If one of the birthdays is his, than apparently seesaw patterns and Libra Moons don’t have the same strong effect as a strong hard aspect between Mars and Uranus has.

CHARTS
I calculated these charts for birth in Kuwait at Sunrise. Remember that place and time of birth are unknown. The displayed Ascendant and Midheaven and degree of the Moon are fictious! 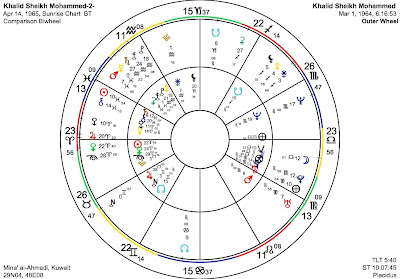