Not surprising and happy result for astrology: Van Rompuy is the 'President'(in fact chairman) of the European Union with transit Jupiter - the planet of successes - conjunct progressed Midheaven. Dutch MP Balkenende (who was named even though he kept saying that he was not a candidate and nobody asked him to be one) had transit Saturn inconjunct Midheaven. So now we now for sure that it is better to have Jupiter on your side than Saturn on a slide.

And Balkenende's chart is here: 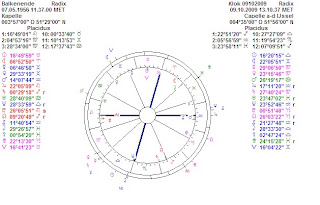 The posts about Van Rompuy and Balkenende can be found easily. Just type their names in the upper left corner of my blog.
Geplaatst door Astromarkt op 7:05 PM

It was rather interesting for me to read the article. Thanks for it. I like such themes and anything that is connected to them. I definitely want to read more soon.