Prince Charles will be 61 on the 14th of November. Now that I write this it is already November 14 in London, so: happy birthday to him!

I have written about Prince Charles before. Click here to see posts about him, his chart, relations and more...And if you are interested in his artistic talents, see the post on my site Art&Astrology. And there is a post about Prince Charles and Camilla on Astrology-love-romance.blogspot.com.

Below you see Charles' solar return chart (his birthday chart). It is a rather fortunate solar return chart at first sight, with the Sun on the horizon and Jupiter on top. Jupiter rules the 8th house of life and death, however.
The Northern Node on Midheaven might mean that family matters more than ever...There is also a conjunction of the progressed Sun and transitting Node on his birthday, highlighting the group , company, family and nation.
Next year we will know what was the meaning of this solar return, but we might do some guessing. There is an aspect between Moon and Midheaven, so it is a year of changes. 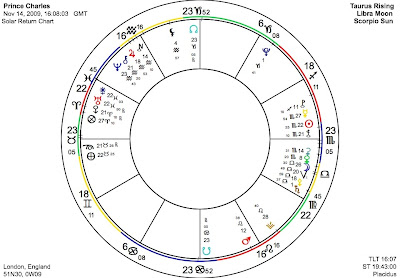 It's that we know that his mother will not step back in favour of her son, but it looks like the solar return chart for a king to be*). It is the same combination as in the natal chart of his eldest son William, who has Sun conjunct Descendant and Jupiter conjunct Midheaven. In 2010 Prince William's progressed Midheaven (progression .98 degree/year) is changing sign and the first aspect will be an inconjunction with the ruler of the 8th house, the Sun. It might mean that he will be taken aback by a change in status. I doubt that he will become a father, so it might be another kind of family matter (houses 4/10 and 8).

It might be an important year coming for Charles, anyway, with opportunities to grow, travel and convince the public. I'll be back next year (I hope) to see how the events matched the solar return ....or not. Scorpio Charles will move on in 2010, somehow.

-----
*) The progressed chart of his mother Queen Elisabeth has a Yod of the Ascendant inconjunct Saturn ruler 8 and Mars inconjunct Saturn, with Mars sextile Ascendant. The Yod is pointing at Saturn, and Saturn is conjunct Midheaven in her natal chart.
The combination of AC/Mars/Saturn often is reflecting a situation of restricted energy or a blockade (the end of energy, work, mourning, death etc.).She might be less energetic in 2010 than she usually is and will have to take good care of herself and her husband with whom she celebrated a 60 years marriage in 2007. See the post of that day... Maybe that is why Charles will get more chances to show up in official occasions in 2010.