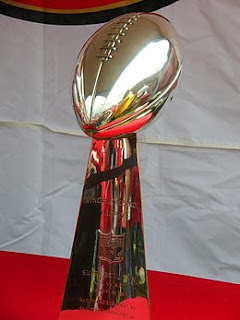 When you click on the label 'football' you find a few posts in which I try to 'predict' the results of a match or game by using the MC of the final moment to see if there is a 'hit' with the coach's natal chart.
I also use the transits and progressions of the coach. I wanted to try it on the Super Bowl of February 3, 2013. It is a special match, because the two coaches are brothers (John and Jim Harbaugh).

SUPER BOWL CHART?
I thought it would be very interesting to see who wins and to see how the charts of the brothers are reflecting this. The problem with the chart of the SuperBowl is, however, that there is no indication for the eact time of the end of the match! The average SuperBowl lasts for about 3,5 hours, but it could be more (or less), depending on the length of shows and commercials. That makes it hard for to use my method. But I still want to have a look at the charts of the brothers.


THE HARBAUGH SYNASTRY
The sun signs of the brothers don't match. Their synastry is sun square sun. Both are starts, both want to draw attention and both want to be the boss. It must be very hard to be their mother and give both of them the attention that they need! They are two superstars fighting each other in the Super Bowl!
Also, Uranus of Jim is conjunct the Pluto of John. That is stimulating for tension and stress. Perhaps they are the sources of each other's level of adrenaline:)! They will certainly feel the heat on February 3, 2013, day of the match.

Jim Harbaugh, San Francisco 94ers, was born on December 23, 1963.  In the natal chart Jim has a tight trine between Mars and Pluto, for the strong drive to win, strong muscles and tremendous energy. He is a typical 'strong man'.

Here is what is in his chart right now:
1. The match takes place on a day with transit Sun conjunct his Pholus. That is a yearly 'turning point' day. Mine was on Friday January 18, when the pedicurist hurt my foot. So Jim, don't stamp your foot!:)
2. Transit Pholus is sextile progressed Sun: an easy way out to a point of no return.
3. There is a minor Jupiter transit (105d) with progressed Sun: a merely visible success.

JOHN
John Harbaugh, Baltimore Ravens, was born on September 23, 1962. In the natal chart of John, Pluto rises before the Sun so that he has a strong focus on strategy and strength.

RESULT?
How can these lists offer any insight in the results of the Super Bowl? They can't because I don't have the chart of the final moment. I want to know who is happy in the end. I think that Jim has 'better astrological cards' because of the Jupiter and because of the fact that his team is favorite while John has a minor Saturn progression. On the other hand, those trine see to bring luck, too (and John has them). So:

Can anybody give me the hour of that final moment please?

Also visit: Astromarkt.net for example about not matching suns and sun signs http://www.astromarkt.net/not-matching-sunsings-in-astrology.html

Last year's super bowl lasted for 3 hrs 22 mins. Based off that, this year's game should end at 8:52pm CST (assuming the game does not go into overtime). My guess would be that the game should be over by 9:15pm CST at the latest.

Thank you for the information. It is a pity that there is no 'final moment' with a delay of a max of 5-10 minutes. That makes it too difficult.

I included the charts of the owners (born April 10 1960 for Baltimore and April 18, 1949 for San Francisco 94ers) and even with those data I have no clue. Neptune opposition the progressed Sun of the owner of SF94ers is not exactly cheerful...

When I woke up this morning I read that the Baltimore Ravens won. I still haven't found a report mentioning the time of the final minute...