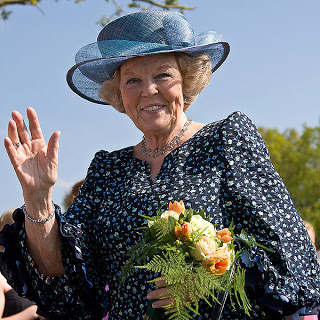 Dutch Queen Beatrix said that she will abdicate in 2013, on April 30. She announced this within 24 hours after my column on Astromarkt (link: http://www.astromarkt.net/column-over-astrologie-en-horoscopen.html ) where I mentioned three signs of change in position:
- Moon opposition Midheaven in the solar return chart for this year
- Pholus square Moon and MC in the solar return chart
- Transit Saturn square progressed Sun (announcing the end of a period of time, or a goodbye)
Her birthday is tomorrow. Here is the solar return of 2013.

I also noticed that the solar return chart of the king to be (Willem Alexander) shows dramatic change while transit Saturn will be on his Ascendant on the day that he will be installed. In the Netherlands there is no coronation. The crown doesn't fit any head. There is no one good enough to place the crown on anyone's head. The crown will be on a table, symbol of kingdom but not used. Here is the solar return chart of Willem Alexander (birthday April 27).

LINK
I wrote about possible abdication in 2013 before (and I made the choice only to bet a chocolate bar on it, but who is to give me one?:)
http://astropost.blogspot.nl/2012/01/pholus-and-saturn-when-you-retire.html
Reasons to opt for 2013 were:


2013 might be a better choice, because transit Neptune is still on his midpoint Sun/Moon this year (though I noticed that Neptune was 'there' whenever there was a coronation). His mother will have a solar return with Sun square Saturn and Moon on IC in 2013. So I'd guess that 2013 might be 'the' year, but I wouldn't bet my money on it (maybe a chocolate bar:).

you have such a wonderful article resource. I have my website www.astrosay.com would you like to exchange a link with us . good work keep going.

Every time its invigorating to read your astrological news.