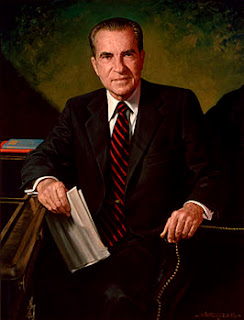 The chart of President Richard Nixon, provided by Astro.com, has an AA rating. That means that the time of birth is amazingly accurate:). I can see that. On the day that he had to resign there were 6 exact transits:
1. Transit Saturn exactly inconjunct IC and semi sextile Midheaven
Saturn and Midheaven together symbolize an end (Saturn) with a loss involved (inconjunct). Sometimes people fall during a transit of Saturn or break a bone.

2. Transit Jupiter square Midheaven
Jupiter helps, always. Nixon was not prosecuted for Watergate (he received a pardon by his successor Ford). Jupiter-MC is a classical aspect for retirement.

3.   Transit Node square Ascendant
A difficulty between the community or family and the personal situation...

4.  Progressed chart: Jupiter inconjunct Midheaven
He was blessed, but...he had to give up his position.

Those where only the six exact transits for that day, August 9, 1974. There were more indications at the time, like transit Uranus square Neptune (a hype), Progressed MC semi square Pluto (frustrating challenges and stress) and Transit Pluto inconjunct Progressed Venus (loss of money or value, difficult choices to make with a loss involved). When there is an important moment in life, there are usually more than 3 important transits or progressions.