The chart of the President of Venezuela, Hugo Chavez, shows the health problems that he is dealing with for a substantial period of time now. The change of the sign of the progressed sun was parallel with the change in life style. Now, negative tendencies are reflected by transit Neptune and inconjunctions, transits of ruler 8 and Chiron. Here is a list:

1. Transit Neptune inconjunct Progressed Sun
2. Transit Neptune inconjunct Progressed Ascendant/Midheaven
3. Transit Uranus (ruling the 8th house of life crisis) is elevated now and trine natal Sun. Uranus is a prominent planet in his natal chart. Uranus rises before his sun and is on the midpoint Sun/Moon. Hugo Chavez is a man who was born to change his world.
4. Transit Chiron is trine the natal Ascendant (for cures?)
5. Progressed Midheaven is on the way to a hard aspect with natal Saturn, a third quincunx.

What does it mean?
- Transit of Neptune are confusing and often mirror a period of gossip. Newspapers are speculating about the near death of the man who has lung problems since his last cancer surgery. It is still a mystery where the cancer was located.Neptune is also the symbol of medication.
- Inconjunctions (quincunxes) aren't good for health. They mean lack of balance and a risk of loss. More inconjunctions, more risk of health issues. The transits are a burden for persons who are already ill, old or in trouble. 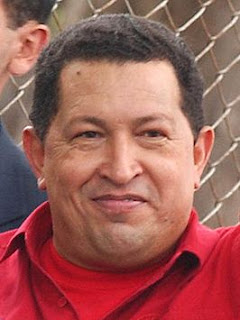 EARLIER SITUATION
Hugo Chavez had transit Pluto opposition Ascendant last year when his sun sign changed. He also dealt with transit Saturn square Sun. This transit is resonating the natal Sun-Saturn conflict and therefore of strong influence. Barriers, limitations, restrictions and matters of age and time were blocking the vitality last year. The life of Chavez seems to have been a constant struggle with barriers and mountains to climb. The aspect of Moon conjunct Jupiter contributed to his popularity. (Many of the American Presidents benefitted of a Moon-Jupiter aspect in the race for the Presidency. It is the kind of aspect that brings support.)

Even though there is less support than in earlier years, Hugo Chavez still has followers. And they are anxious about his health. We will have to wait and see what medication and doctors can do.

PS
If you want to compare and study astrology, try today's post about King Juan Carlos, who also deals with transit Neptune and a recently changed progressed Sun.