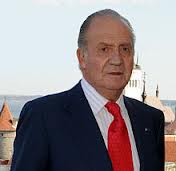 Last year was a an 'annus horribilis' for the Spanish royal family. They were confronted with bad press and less popularity after the Botswana affair (Juan Carlos' elephant hunt with German lady) and the involvement of a son in law in a corruption scandall. There was a wedding aniversary, but there were no public celebrations. The situation was mirrored by the King's progressed chart (P Sun conjunct Saturn, see the post about his broken leg and crashing marriage ) It was the end of 'dulce decorum'.

Today is his 75th birthday. Is there anything in his chart to be happy about now?

I think there is not much. There is not much fun in the chart, except for transit Jupiter inconjunct Venus (an aspect, indicating a moment for a party, but - inconjunct!- with a loss involved or something out of balance).  Transits of Neptune don't help to clear the air.

RECENT ASTROLOGICAL SITUATION
King Juan Carlos recently had Progressed Mars sesquisquare Neptune, debilitating his energy level and drive. Last year his progressed sun sign changed, in line with the more or less forced upon change of life style after the protests about the elephant hunt.

1. Transit Neptune, the confusing transit  is inconjunct the progressed Ascendant of Juan Carlos now. 2. Transit Neptune is also inconjunct his Progressed Sun/Moon.
Neptune inconjunct Ascendant could be read as a negative perspective. Neptune inconjunct Sun/Moon demotivates. Inconjunctions aren't beneficial for health. Two of them are heavy. Three is a crowd.
3. There is company for the symbol of disillusion! There is also transit Pholus semi square Sun/Moon, reflecting the period of a turning point in the family and ... in motivation.
4. His solar return chart has an elevated Uranus, so I expect that nerves, 'surprises' and more change are on the way.
It seems that troubles aren't over yet, for Juan Carlos.

SPAIN
Just like the charts of football coaches mirror the state of their team, the charts of kings or presidents may reflect the state of the nation, too. A good example of that is the chart of the Emperor of Japan in the days of the tsunami disaster (see post). The transits and progressions of King Juan Carlos' chart seem to represent the nasty economical situation in Spain, where too many young men and woman are jobless. In that situation it doesn't help, apparently, that the royal leader of Spain has a chart with a prominent Jupiter and Pluto on the meridian. The natal chart promised success and he certainly had it. But right now there is a crisis in his chart. With so many quincunxes and so much of the negative influence of Neptune any self esteem tends to be reduced, even when a person is rich, powerful, full of confidence, and positive in heart and soul (Sun/Moon semi square Jupiter in natal chart).

Nevertheless, with Venus-Jupiter, in spite of all that, it might still be a happy birthday party today...

Also visit: Astromarkt.net, for example if you like to learn more about Sun/Moon midpoint or Pholus