Or should the title be: Neptune inconjunct Varuna and leaking lavatories? I didn't want to be rude, but in fact: this IS about dirty water and more during Neptune-Varuna progressions.

One of my aunts is 88 years old and lives in a so called appartment building for the elderly. "So called" because lately they started filling the old and never renovated building with ex-detainees. The tattood guys live amid the feable and ill oldies. It is affordable, but since a year there are more and more problems. The carpets curl, the elevators are out of order and/or there are water problems (veteran disease risks). Worse is that this Virgo lady, who is very very clean and hates dirt, had to endure a "renovation" of the drain pipes because they were leaking from above (...) , later her toilet refused to flush and now she told me that the plumber was in her house to fix a dirty problem coming from the pipes of the upper appartments.

Of course I wondered how this was reflected in her chart. It was in her progressed chart (so it won't last forever) like this:

Isn't it accurate of that chart? 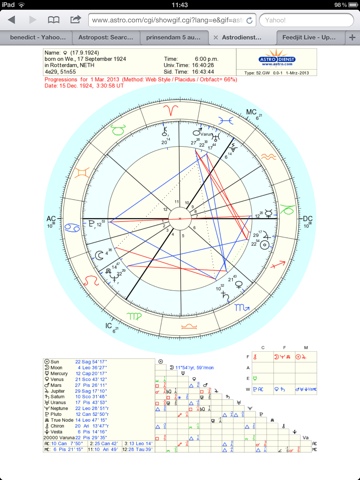