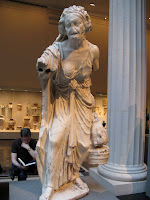 In a lot of Western countries the situation of the elderly used to be better than ever before in history. up to now. Unlike the old and ill in history those who were too old to take care of themselves didn't have to depend on children, church or donations. They didn't have to take a blanket and die alone on an icy mountain. They were take  care off by the state.  Pluto in Capricorn and Saturn in Scorpio are symbols of state finance. Now that Pluto is in Capricorn states can't afford to have debts any more. Can they still afford to provide for the elderly?

In my country the State pension for all elderly (regardless of their income or possessions) started in 1956, with Saturn in Scorpio in a narrow square with Pluto in Leo. That was an important moment in history for the elderly and their children. They were liberated. There was less to worry about. Of course, you had to pay (Pluto) taxes (Saturn)...

Most companies also joined a pension fund for their employees. Some of the companies even offered free retirement funds and an early retirement at age 57!

Meanwhile, people got older and older. The generations born after World War II got less children than ever before. They were not needed for future care anymore and the world -including Europe - was overcrowded, they said, in the 60/70's.

We all had a good life and good prospects until the crisis. Technology would conquer and win! We might even live forever in prosperity.
The picture shows how comfortable old age looked like...

Now, with Saturn in Scorpio in mutual reception with Pluto in Capricorn they start arguiging about when to retire and about what the elderly should be given.

When in 1956 the first 65+ men and women were enabled to live on their own, people were not against the fact that they had to pay for them. There was more and more money to be earned and the future was bright. Now we see depression all around. Those under the age of 40 fear about their old age and their future and a controversy between the grandparents and grandchildren or parents and children seems to be on the way. When the man or woman aged 40 will be 65+ there will be even less children to provide for them and they will still be paying for the 85+...

There was no problem when there was enough money, but ... this money was invested the wrong way and the governments and employers took away money from the funds in the good years. So now we have a problem (Pluto) with the elderly (Capricorn) that is in fact an economical crisis and political failure of governments without a policy that looked ahead for more than their four years caused all this.
There is no time for taking the old men and women outside, no time for a talk or a walk. And politicians point at family (even if there isn't any and even if the family has to work harder and longer than ever). They must do it. We are back at the starting point. When Saturn is conjunct Pluto, in January 2020, will financing old age start all over again, another way? I'll have to find out more about Saturn conjunct Pluto in history to see what happened. However...

LINKS
At least, I didn't have to dive into history about Pluto in Capricorn, because I found an interesting study on Celestial Insight. I'll be back on the conjunction with Saturn in those days...

Also visit: Astromarkt.net for example about Saturn and Pluto aspects and the boomerang effect of the aspect. Quote:


No water in the wine with Saturn and Pluto on the label....