Chart of Benedict XVI: the day after 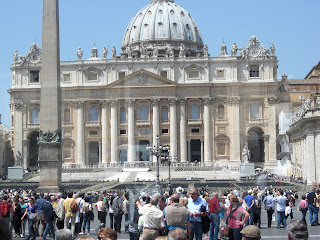 Yesterday the papacy of Benedict XVI ended by abdication. Here you see three charts of Benedict XVI: the natal chart with transits, solar return 2012 and: natal and progressed together. Transits and progressions clearly mirror the kind of change in the life of the now ex-pope. I'll show you how.


1. In the progressed chart we see Pluto on the Ascendant, exactly. The Ascendant is the symbol of the situation (your view on the world outside) and … of the name. Pluto is the symbol of transformation, value, authority, stress, challenge, issues of life and death and change. There is hardly a better symbol than Pluto-Ascendant to describe what happened yesterday. Pluto also may refer to (too much) pressure. As Pluto is the ruler of the 8th house and positioned in the 4th this is a symbol of final issues (like this one) and a possible indication for the danger of death. I read that he recently had fysical problems.

4. The solar return of his birthday in 2012 (valid until the next birthday in 2013) has Sun opposition Saturn. Afflicted Sun-Saturn moments are moments of discontinuation, ends and... goodbyes.

Two times symbols of change, one time symbol of an ending and the symbol of a smooth start of a more isolated way of life are about enough for a man of his age. But after I published this, I realized that there is even more, like:
- transit Uranus sesquisquare progressed Mars
- Jupiter novile progressed Sun (rejoycing positive change)
- Neptune transit quindecile progressed IC (weakness, basically)
- transit Uranus trine Saturn (breaking free)

I don't really know what to make of Progressed Mars trine Ceres. Ceres is an important figure in his chart and represents motherhood (or the holy mother figure). He said that he will continue to work for the (mother)church.

On Transit Mars inconjunct Progressed Mars you can see the energy drain of the final days of the papacy.

LINK
See the post of June 2012 about the power struggle in the Vatican, Cardinal Sodano and Cardinal Bertone and their synastry with the Pope.
( http://astropost.blogspot.nl/2012/06/sun-pluto-sun-mars-synastry.html ). I quote:


" Cardinal Sodano (November 23, 1927) has denied the rumors about a power struggle in the Vatican (perhaps anticipating on the end of the papacy of Pope Benedict). But before, he denied that there was any abuse by priests... "


Also visit: Astromarkt.net for example about the astrology of popes or use the labels for more about religion.