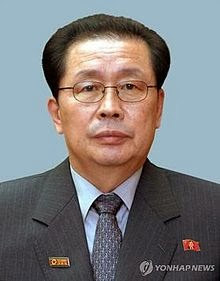 Here are the chart, transits and progressions of the late husband of Kim Young-Un's aunt: Jang Sung-taek. The man who was referred to as a 'dog' used to have a position of power. His life style (women, booze and fraud), the officials said, was the reason for his execution. A few weeks earlier, the ex-lover of Kim Young-Un was executed because of acting in a 'porn' movie. Kim Young-Un's year of birth is 1983 or 1984, so it is hard to have a look at HIS chart, though every January 8' chart has the natal Sun opposition the Mars of 'uncle' Jang. Sun-Mars conflicts between men refer to competition.

You see? There were 3 quincunxes pointing at losing balance and danger of a loss. Mars was involved twice (hurt, action) and Pluto also twice (danger, challenges). Even without explaining all of the transits and progressions, it is easy to see that he was in the middle of a difficult period. Anyone born on February 2, 1946 should pay attention to his health and safety right now, but...
You don't HAVE to be murdered when you are born on the same day.

Kenian politician Alpha_Oumar_Konaré, an American comedian named Clark and businessman Constantine Papadakis (died 2009 - cause pneumonia) were also born on Februari 2, 1946, but not in North Korea, where it is so easy to get executed in the name of the grandson of the first leader.

A difficult natal Pluto and a position of power, a dictator and a hard synastry with the dictator's chart may get you in a difficult situation...