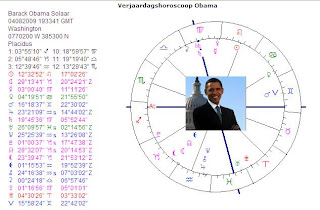 During "Gates-gate" transit Saturnus was inconjunct his natal and progressed Ascendant. I remember the first time when Saturn hit his Ascendant. That was when he mistook clear voyants for astrologers and said he never consulted dead Presidents, referring to Nancy Reagan. He had to apologize and talk to Nancy then...In February (same kind of aspects) he supported the wrong guy and girl (Dasch and Killefer). It is clear that Saturn's inconjunctions are reflecting mistakes.

On August 4, Barack Obama will be 48. If he chooses to celebrate his birthday in the White House, Saturn will be on the Midheaven op his solar return chart. So maybe he would better select another place for his birthday party. Saturn on the SR Midheaven might reflect the disadvantages of his position and the importance of responsibilities and ...eventual mistakes.

PROGRESSED Mars, Saturn, Pluto...
In the progressed chart of Obama the combination of Mars, Saturn and Pluto becomes tighter and tighter (see earlier posts, click the label Obama). This combination of aspects warns for the danger of enemies, violence and political struggle. To have to be defended (Mars-Pluto) because of your status (Saturn) is maybe one of the other possible ways to reflect Mars with Saturn and Pluto.

SUN TRINE JUPITER 2007/2010
By the end of August 2010 his progressed Sun will have changed sign to Libra and the first aspect is a trine with the optimistic Jupiter in July 2011. Those who are so fortunate to have an aspect with Jupiter first of all when the progressed Sun is in a new sign can see their lives change in a positive way. Of course, Obama will benefit in the first place. There has been a previous trine with Jupiter. In December 2007 his progressed Sun was trine progressed Jupiter. At the time a new poll showed that he was on the lead in Iowa, a crucial moment in the caucus.) The whole period between the trine with progressed and natal Jupiter will be coloured with support and success, no matter what hard times provided by Saturn may lay ahead. Jupiter also reflects travelling, meeting 'internationals' and growth (more knowledge, more insight).