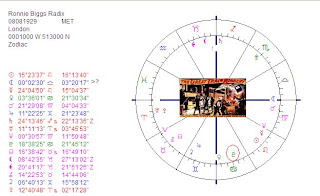 Ronnie Biggs is allowed to spend the rest of his life out of jail. It is official now, perhaps as a birthday present (his 80th birthday is on the 8th). Transit Pluto sesquisquare the natal Sun tells me that he has health problems in this life changing period. Pluto is an important planet in his natal chart. Ronnie Biggs chart has Pluto rising before the Sun. Pluto symbolizes politics, power, sex, challenges, transformations and money. Biggs'life has changed because of money. Four sextiles and two trines guided him to the 'easy way' to make a fortune: robbery.

LUCKY JUPITER
It was on Biggs's 34th birthday when it happened, in the year of Biggs's progressed Mercury trine Jupiter. On the day of the robbery transit Jupiter was square progressed Pluto. The combination promisses success (big money). Biggs was convicted and jailed but managed to escape on July 7, 1965 (with transit Uranus square Jupiter and inconjunct Uranus for happy change, but...with tension). He underwent plastic surgery in Paris and moved to Australia and later to Brazil.

On May 7, 2001 he voluntarily returned to England and was sent back to jail immediately. That was with Uranus opposition his Mercury, Jupiter sextile and Pluto trine Sun in the year of progressed Mars inconjunct Uranus (perfectly reflecting losing - inconjunction - freedom - Uranus-).

This year the progressed Sun will be trine Venus (for peace and rest). Perhaps all is well that ends well? Earlier reports said that he will live in a nursing home (payed by the State). There have been protests of taxpayers who don't want him to be in a nurse home at their costs. Pluto, the planet of money, power, and jealousy!, is indeed important in the natal chart of Ronnie Biggs...