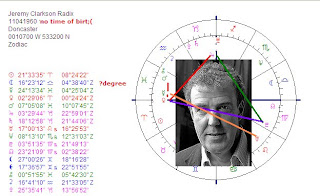 I'm a fan and follower of Top Gear, the best program about cars in the world IMO. So I read Jeremy Clarkson's 10 most controversial moments on Timesonline.co.uk and then I thought: where in the chart is the controversial political incorrect witty talker?

Jeremy Clarkson keeps talking and always has an answer. Mercury in Pisces doesn't make major (Ptolemeic) aspects and that is screaming: communications at any level (anyhow!). He writes, too. Yes, the Pisces mind is creative and the Pisces tale may be endless...

Mercury may not make major aspects, there are minor aspects: Mercury is biquintile Uranus and that is a perfect statement for creative (biquintile) controversial or new (Uranus) ideas (Mercury)! Or for 'open-minded approach' and enjoying 'new gadgets' (read CafeAstrology about this aspect!).
Notice that Saturn is inconjunct Uranus. The combination of Mercury, Saturn and Uranus refers to freedom of speech (and it's limitations:). That explains, doesn't it?

One might wonder why Mercury-Uranus is linked to controversial opinions. Just like Venus-Uranus marries too fast and Mars-Uranus is explosive, Mercury-Uranus expresses his opinion too fast. Maybe the Saturnal influence teaches Clarkson when to count to 10, one day, when he gets older:)

Of course, this is only what I found on the day of his birth. I wonder if Uranus or Mercury is angular in his chart. Without hour of birth that information is missing. For finding the witty controversial, the data was sufficient. And it is all that I wanted to know.

(PS About his successes: Venus is inconjunct Pluto and square Jupiter, reflecting his success and the extreme amount of earned money. It is also showing the love (Venus) for horse (Jupiter) power (Pluto)!)

More about Jeremy Clarkson on Wikipedia...