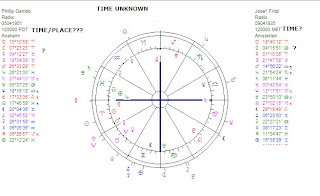 Phililip Garrido (the man who kidnapped Jaycee) and Josef Fritzl didn't only capture and hide a girl, they also fathered her children. That makes them different then, for example, Marc Dutroux. There are two important aspects that Fritzl and Garrido share:

1. How to realise a dream?
The aspect between Sun and Neptune enables a person to either be a dreamer and dream his life away or to realise dreams. The Sun-Neptune aspect also creates frauds, if necessary.

Phillip Garrido and Josef Fritzl both have an aspect between Sun and Neptune. Garrido has Sun opposition Neptune. Josef Fritzl has Sun biquintile Neptune. In an earlier post about Sun-Neptune aspects I wrote this:

It is easy to believe and it is easy to pretend with a Sun-Neptune aspect in your chart. You could be very naïve or a con man, but in a way your way of living has something ‘double’.

Phillip Garrido and Josef Fritzl pretended to be good neighbours and nice persons. They created a place to hide their true lives and were in fact actors in their own movie. That is very much Sun-Neptune...They also convinced themselves that they were good persons. Fritzl wanted to 'protect his daughter'. Garrido thinks that he is the messenger of angels. They lived in a world of fantasy and fraud and are now (hopefully forever) hidden behind the walls of their prison cells.

2. Intense desire(to have and to hold)
Another aspect that Fritzl and Garrido share is: Venus-Pluto. Fritzl has a sextile, Garrido has a square. I have written about Venus-Pluto (the beauty and the beast) on Astromarkt before. Here I want to add that Pluto always intensifies and when Venus is being intensified feelings and desires are, too. Both men have intense desires and strongly focus on what they want to have. As Venus describes the relationships with women and Pluto symbolises the ability to impress, to have authority or money, it is understandable that the issue of money and values is important. Earning money, impressing ladies with what you have...Fritzl had money and he had the complete authority over women in his households.
There is nothing wrong with strong desires and earning money or the desire to impress others with your belongings as long as nobody gets hurt like the victims of these two elderly men were. These men are criminals and what they wanted was unwanted.

The two aspects don't explain their behaviour, but they contribute to the complete picture. A criminal is not a criminal because of one aspect or placement. What they also share is an Aries Sun. But of course, those who are born under Aries don't share anything with them. Both men have the Moon in capital signs, but it may be coincidence. They are - luckily! - exceptional products of genes, gender, circumstances, experiences, situations and a rare combination of aspects in their natal charts. In our world what they want and what they did is strictly forbidden and they knew it. Let us hope that their victims manage to enjoy life as it should be.

For more about the case of Jayce Lee Dugard on this blog, >click here ...

Use the label FRITZL to see more about Josef Fritzl's chart on this blog...

As an astrologer I would be very careful in offering any explanation on the basis of a chart with "unknown birth time". The less variables you can define the less accurate will be the interpretation, and accuracy and clarity is especially relevant in cases like these.

Hi Anonymous,
I already mentioned in the post that the aspects 'contribute to a complete picture'.
What is not accurate about mentioning facts (the fact that these two men share the same tight aspect combinations) and that they both did the same (forcing a young girl to have their babies?)? The basics of astrology is emperical study (we see and we note it) and that is what I did here.

Thank you for your post! It was so accurate AND interesting!

I have no aspects for depression in my chart, yet I DO have depression. I have Moon sextile Saturn by 1. I feel like there are many times my mom was cold and unfeeling toward me in childhood. The entire description fits me exactly!!

I think the watery moon is too delicate to be aspected by Saturn even in a trine or sextile. The Moon is in its fall in Capricorn, so this is not surprising.

I also believe that one should try to avoid aspects between Venus and planets such as Mars, Saturn and Pluto because Venus is in her fall and detriment in the signs they rule. I have also found that the Moon should also not aspect Mars because the Moon is in its detriment in Capricorn (the sign of Mars' exaltation).

Thank you for your interesting comment! I have reposted it in the post about Moon-Saturn aspects (thought it was ment to be placed there?). Food for thought!