The money in the chart of Sarah Ferguson 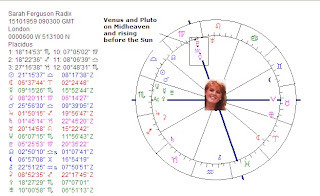 Poor Sarah Ferguson? She is filming a documentary in a poor neighbourhood and had so much critics and remarks about patronizing and hypocrisy that she (according to the Daily Mail) fled to Spain, where she stays with former husband Andrew in a 30+ million pound worth estate. Money, money, money, it is not always funny!:)

The planets of money and values, Venus and Pluto are on her Midheaven and rising before the Sun to express the importance of earning money. She was super rich, she went bankrupt, she came back and now she is down a bit. The progressed Moon is making aspects with Neptune and Pluto, just like in her natal chart.

Progressed Moon inconjunct Pluto and square Neptune seems to me the ideal aspect combination to look for (and find) shelter, but it is also an aspect combination that reveals sadness. In her natal chart the Moon is inconjunct Pluto AND Neptune. Moon inconjunct Pluto makes it hard to behave like you should. The effect is that a person sometimes looses control over the way of living (Sun) or the way of behaving (Moon). Perhaps the combinattion with Neptune makes her extra vulnerable. The public (and media) opinion can be hard. The natal chart of Sarah Ferguson - with the Moon (behaviour, popularity) inconjunct Venus-Pluto on MC) - warns about possible financial misbehaviour. Maybe she learned how to control her food and money problems, but since she is a Duchess it is rather strange to see her in this documentary and in that place. She is better off now. I think that she is recovering and supported (transit Jupiter is exactly trine her natal Sun). Hmm...Spain!

PS More than a year ago I wrote about the match (or not) between Sarah and Prince Andrew. Cick HERE for that post...

More about Venus and Pluto combinations on my site Astromarkt...