Two persons are in the news these days: William Calley and Abdel Basset al-Megrahi. The charts of the day of birth of William Calley (convicted for his role in the My Lai murder case) and Abdel Basset al-Megrahi (the Lockerbie-man) are similar in many ways. There lives have similarities, too. Both were convicted for the murder of a large group of persons. The word 'scapegoat' is being used in the bio's of both men. How do their charts reflect this?

THE FACTS AND PRESENT SITUATION
Calley and Basset al-Megrahi both have transits or progressions with Sun and Saturn and they also have Sun-Saturn in aspect in the natal chart. They also were the only ones convicted for a crime that was committed by more than one person.

Calley admitted that he joined the murder of women and children in a Vietnamese village. He was allowed to go home and had house arrest for 3.5 years after his conviction (life in jail*). He recently said that he is very sorry about My Lai. The solar return chart with Sun square Saturn shows that it is time for remorse. The transit of Saturn last year activated the existing natal aspect between Sun and Saturn and made him feel the burden of the guilt.

Abdel Basset al-Megrahi pleads not guilty and wants to prove his innocence now that the Scottish government allowed him to leave prison and the UK because he has only 3 months to live due to cancer. He was welcomed by 'fans' in Libya... His progressed Sun is trine progressed Saturn right now and will be trine natal Saturn within 3 years. This aspect usually shows growing self respect, but is also highlighting the existing opposition between Sun and Saturn in the natal chart. There is, in other words, a basic question mark and it is easy to see righ now.

THE NATAL CHARTS
Here are the 6 components in the natal chart that they share:

1. Sun-Saturn
Both have Sun in aspect with Saturn (they both were being blamed)

2. Saturn-Uranus
Abdel Basset al-Megrahi has a threefold midpoint combination of Sun, Saturn and Uranus in his chart, reflecting restraint liberty and breaking free. Calley has Sun conjunct Saturn and Uranus is rising before the conjunction.

3. Mars-Pluto
Abdel Basset has Mars square Pluto. Calley has Mars trine Pluto. They both used force and/or had to defend themselves.

4. Sun-Mars
Both have a minor aspect between Sun and Mars (Calley half quintile, Abdel Basset a sesqui semi square - 67.5 degrees -). They are both soldiers, activists or 'man with muscles'.

5. Mercury-Neptune
Both have an aspect between Mercury and Neptune (Calley the trine, Basset has the opposition). The aspect refers to mixing facts and fantasy (telling tales) and to miscommunications and misunderstandings and sometimes this aspect points at a negative mentality or judgment (by themselves or others!). In Mercury and lies I write about the Mercury-Neptune way of lying:

6. Mercury-Neptune with Pluto
They both have an aspect between Mercury and Pluto (Basset the trine, Calley the sesqui semi square), too. That means that facts are related to secrecy and discretion.

7. Last but not least: the pattern of unnatural death
In both charts Sun, Mars, Saturn and Pluto are connected with each other. The combination of planets reflect the importance of the issue of unnatural death in their lives. If one of those planets have an important angular place or rule the Ascendant, this theme will be even more important in their lives than it will be in the charts of others who were born on their days of birth.

See the charts of the days of birth at noon: 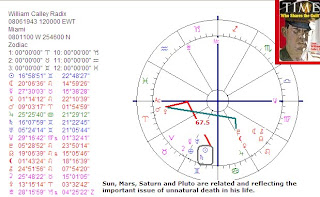 THE DIFFERENT PATTERN OF ASPECTS
The pattern of aspects is completely different!

Calley has 8 sextiles, the aspect of the easy way out. With so many sextiles in a chart there is no energy to make choices and a 'letting go' mentality. Imagine, he signed up for the army because his car broke down near a recruting office! There are no helping squares in his chart, either. The fact that Saturn rises before the Sun seems to reflect the guilt and the blame that will always be part of his life. It seems to me like the chart of a person who is lived by the given circumstances and group codes, just like he tells us (he says he just followed orders). 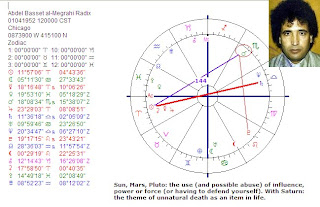 Abdel Basset al-Megrahi has 3 inconjunctions and a semi sextiles (reflecting illness) and 3 trines with 1 sextile. There are 5 major afflictions involving Mars, Uranus, Saturn and Pluto. Those are the planets of incidents, unnatural death, arrests, restricted liberty and terrorism, whether he was responsible or not. The opposition between Sun and Saturn is reflecting the question if he was guilty, just like he tells us.

THE DAYS OF BIRTH
Of course, these are only the reflections of the days of birth. The place and time of birth is not known, so we don't know the Ascendant, the Midheaven, the degree of the Moon and the important midpoints Sun/Moon and AC/MC. Angular placements completely change the astrological identity! Many persons were born on the mentioned days. Persons like Bernard Stiegler (born April 1, 1952), who became a philosopher when he was in prison for armed robbery! That is another indication of the importance of sextiles in the charts of convicts (more info? hit the label 'sextile').

Another well known person born on the same day as Basset is Annette O'Toole. She was an actor all her life and in her case the Mercury-Neptune trine helps her to pretend and 'tell tales'. Of course gender and social circumstances are of great influence

Actor Colin Baker and the deceased athlete and National Guard colonel William D. Davenport were born on the same day as William Calley.

*) He was protected by President Nixon, who’s Jupiter was exactly quindecile the Sun of Calley. Jupiter is the symbol of protection.