The combination of Saturn and Uranus has a nasty effect on liberty, independence and freedom (of speach, behaviour), always; Jayce Lee Dugard, Natascha Kampusch, Elisabeth Fritzl and Sabine Dardenne found out hów nasty the effect can be in certain circumstances...It is Saturn who mutilated Uranus.

Jaycee Lee Dugard was kidnapped when she was only 11 and gave birth to a child when she was 13/14 years old and a second child 4 years later. The children (age 11 and 15) never went to school or to a doctor. A pedophile hid her and her children in his back yard for 18 years. The age of 11/12 seems to be a dangerous ages for girls. Her story reminds us of Natascha Kampusch and Elisabeth Fritzl, whose charts are on this blog, too (see the links at the bottom of this post).

SABINE
Sabine Dardenne (surviving victim of Marc Dutroux, born October 28, 1983) was also only 12 when Dutroux abducted her. He closed her in with progressed Sun square progressed Ceres and with an important combination of transits with her Sun. Transit Uranus square Sun and transit Saturn inconjunct Sun on a day with solar transit inconjunct Saturn and opposition Uranus. Just like in the chart of Natascha Kampusch*) Saturn and Uranus together reflected seclusion and the end of freedom. In her natal chart Saturn is semi sextile Uranus and conjunct Sun. Marc Dutroux's (see his chart on my site Astromarkt...) Mars was exactly opposition hers (so that he was attracted to her) and his Uranus was square her Saturn...again Saturn and Uranus!

NATASCHA
Natascha Kampusch has 10 sextiles and trines in her chart. That makes it rather difficult to escape, because these so called harmonious aspects don't produce action. They produce acceptation. The Saturn-Uranus conjunction is very influential in her chart. It is the combination of restricted freedom and the rebellion against is. In the reading of her chart you may see how active this combination was at important moments in her life. The man who held her in his house was named Priklopil. When he kidnapped Natascha transit Uranus was conjunct his Saturn. The Saturn/Uranus connection in this case is obvious. His Uranus is opposition her Sun. Her midpoint Saturn/Uranus is biquintile his natal Sun. His midpoint Saturn/Uranus is square her natal Ascendant...
Click to see Natascha Kampusch' chart with hour of birth... 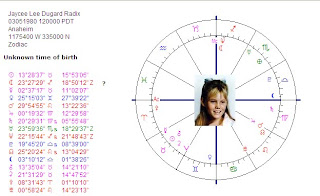 Sun-Uranus connection
The progessed Sun of Jaycee was conjunct the progressed Sun of the man who stole her out of her life in 1991 (Remember that Elisabeth and Joseph Fritzl were born on the same day, so with Sun conjunct Sun?) That is when their lives joined. In 1991 her progressed Sun was opposition Uranus, reflecting a sudden change caused by others. So Phillip Garrido's Sun was opposition her Uranus, too. He became the living symbol of the contrary (opposition) of what freedom (Uranus) is.
Phillip Garrido who (with the help of his wife) kidnapped her, was born April 5, 1950.

On June 10 transit Uranus was trine her natal Sun (= it was an easy day for the announced sudden change of progressed Sun opposition Uranus).
Now that she is free again, transit Saturn is sextile her progressed Uranus, for an easy way to break free...

Read the story on LA Times.../

LITTLE SAILOR GIRL
The Saturn-Uranus combination is not always as hard and dramatic as in the cases of the abducted and abused girls above. In my country a 13 year old wants to sail around the world SOLO and she is fighting court for that right. Her parents won't stop her, officials will...
Uranus is the oriental planet on the 29th of February 1996, when she was born. Uranus is semi quintile Saturn. Uranus is semi square Sun/Saturn in her natal chart. It is obvious that she wants to break free. The girl was held in the UK last year, when she tried to sail back on her own from the UK to the Netherlands. Now she wants to sail from New Zealand (where she was born) but the authorities of NZ told the press that they will not allow this. Her progressed Sun is almost conjunct Saturn...this is mirroring the situation: she is meeting restrictions, limitations and the law. And because the progressed Sun will be septile her natal Uranus, maybe this period will inspire her. It is a different 'lack of liberty', but it is still the effect of Saturn and Uranus.
Read the full story...

SAGITTARIUS, VIRGO, PISCES AND GEMINI
Many Sagittarians, Virgos, Piscis and Geminis had a transit of both Saturn and Uranus with the natal Sun lately. They experienced the effect in all kinds of ways. As a Sagittarian I dealt with the transit, too. I limited the amount of working hours and limited the access to a blog. Saturn-Uranus sometimes just wakes you up to see that there is a limit. Good line to end a post with, don't you think?

PS ELISABETH
http://astropost.blogspot.com/2008/04/birth-charts-of-josef-fritzl-and.htmlLint to the chart of Elisabeth Fritzl...

See the picture of Saturn and Uranus and another view on another blog... (Abyssal Epistels)