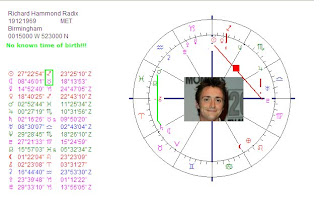 On September 20, 2006 Richard Hammond had a serious accident and he was only lucky to survive and to be able to continue life in good shape. That was with progressed Sun square progressed Jupiter and transit Mars conjunct Uranus. Mars + Uranus together reflect the incident or accident and driving to fast. Various examples on this blog may be found under the label 'accidents'.

CRASH
Yesterday Richard Hammond's precious car bumped into another car and the car was hurt more than Richard was. Now we don't see any transit to accompany this incident (but perhaps his Ascendant was 'hit'). Without hour of birth there is no insight in the placements on the Ascendant, its degree etc. But this example shows that serious accidents that cause physical damage go together with corresponding transits. I had an accident that completely ruined my car and left me without a noticeable scratch with transit Uranus semi square Mercury (23'orb), Saturn biquintile Saturn (13'orb) and Saturn semi sextile Uranus (3'orb). Mars was septile my Ascendant and the transiting Midheaven was exactly 157.5 degrees (sesquisquare + half semi square) Uranus. I have Jupiter semi square Mars/Uranus and conjunct Ascendant, perhaps that combination of planets contributed to the ‘happy’ ending. Richard Hammond has Mars sesquisquare Jupiter/Uranus.

SAG's and MARS-URANUS= rushing horse powers!
The Sagittarians are more often involved in accidents than for example Capricorns. That is astro-logical. Sagittarius is the sign of the hunter, rushing away like the arrow that flies and of the horse and horsepower. But let's see what we can find in the positions of the day of birth of Richard Hammond. Why does speed attract him so much? Mars is biquintile Uranus. That is why! It is THE aspect combination that reflects the drive to rush things (see Astromarkt)...Such an aspect in the chart of a Sagittarian will of course rush the horse powers!

DARING EXCITEMENT (anyhow!)
On December 19, 1969 Venus and Uranus didn't make major aspects. That is mirroring a desire for excitement at any possible level. The combination of Sun Sagittarius (ruled by Jupiter) and Moon in Taurus (ruled by Venus) characterizes him as the 'party animal' (with horse power!).
With Sun square Pluto he is likely to be a fanatic, willing to win and daring to face dangers if needed. He doesn’t make life easy on himself…Sun-Pluto afflictions might live life dangerously and intense, forcing yourself...It is the tightest aspect in his chart, except perhaps for Mars sextile Saturn, a soft warning to take precautions. I think that the positions on his birthday were in line with his later position in public: making a lot of (sometimes dangerous) fun…

Richard Hammond and Jeremy Clarkson both have Mars in Pisces and both do their job for the media (television, glossy magazines).