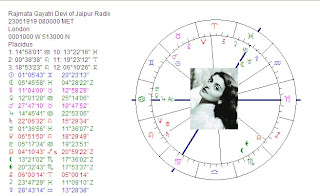 Rajmata Gayatri Devi, former Queen of Jaipur died July 29, 2009. She reached the age of 90. At such an age, every hard aspect might reflect fatality. In May of this year progressed Saturn was square her natal Sun. That is mirroring a step backward in health and possible blockades. Transit Pluto was exactly inconjunct her natal Sun when she passed away. This symbolizes difficulties and transformations with a possible loss.

SOCIALITE (VENUS + JUPITER)
Her natal chart is reflecting the birth of a socialite. Venus was conjunct Jupiter on the Ascendant. The combination of Venus and Jupiter is the combination of the party, having fun and enjoying international settings and travelling. This combination was angular (so: of crucial importance) in her natal chart. She and her husband turned their palace into a hotel and they travelled a lot. That is the effect of a prominent Jupiter. Venus, of course, is the symbol of charm and beauty. On the Ascendant Venus makes you look good, beloved and appreciated. Venus and Jupiter are trine Midheaven and that is very fortunate for your status and position. It is also reflecting a prosperous marriage. That doesn't mean that life was always pleasant.

URANUS
The most tight aspect in her natal chart is Sun square Uranus, for being controversial and different from the rest. Uranus (and Node) are in hard aspect with Sun/Moon. In December 1973 progressed Uranus was exactly square her Natal Sun (because Uranus had retrograded in progression). Her husband died in 1970. Between 1971 and 1975 she experienced the loss of her privy purses and later she spent months in jail after being accused of violating tax laws. Unlike other widows, she remained a socialite.

MARS
The position of the unaspected Mars, rising before her Sun, is reflecting the importance of her husband and her activities to promote polo.