Imagine! My solar return chart has Uranus (close to the Ascendant) square MC and Pluto (near MC) square Ascendant. The angularity of Uranus and Pluto is rather disturbing, IMO, because I found two precedents:

1. Pim Fortuyn was a controversial Dutch politian with non conformistic and non political correct ideas. He was shot and killed by an environmental activist. If he had lived, he would have won the elections, a few days later.
His solar return chart for 2002 had Uranus and Pluto on the angles, related to the 8th house.

2. Prince Charles had transit Uranus on Ascendant when he heard about the accidental death of his ex-wife. In his solar return for that year, Uranus and Pluto were angular, not related to the eight house. It happened in the year after the divorce.

Both solar return charts indicated controversy, very busy days, shocking change in life. But of course, the progressions and transits also mirrored change! The solar return was not a stand alone. Neither is mine....

It looks as if I can't escape change.
So I asked the I-Ching (sorry! Off topic, but I-Ching happens to be the Book of Changes) and the answer was number 49: Revolution! Looks like "they" mean it!

My solar return starts with an appointment with a sort of a dentist (very Pluto ennerving Uransu)
And unlike other years we won't celebrate my birthday in a restaurant due to circumstances.
It starts with intense tension, my new solar year. And maybe that is just all, because I had line 5 and so the I Ching added number 55: abundance!

1. Any experiences with a solar return chart and angular Uranus-Pluto?
2. Is Uranus-Pluto important for you, in 2013? or was it, in 2012?
3. How to be prepared for unespected change and pressure?

The lady in the picture at least has nasty stuff to throw on her enemies down the wall.
Expecting the unespected seems to be the only solution.
I'll keep in touch and will transform the meaning of Uranus-Pluto in "astrological research" with myself as an object of study. Next year, same time, if I am still around, you will have the answers!

PS sorry for the typo's! This was written on IPhone... 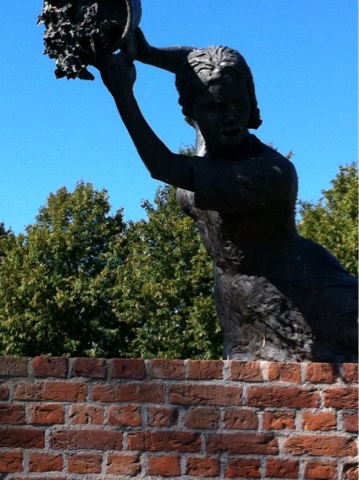