On December 10, two days before my birthday in 2012, I published about my solar return for 2013 with Uranus square Midheaven (on Ascendant) and Pluto (near Midheaven) square Ascendant. This is a first update. I also added the experiences of persons with Uranus and Pluto or midpoint Uranus/Pluto hitting their natal Sun.

Now, what happened so far?

This: my position in society is about to change completely and two women that I know closely had health issues following change in social status reflected by Uranus and Pluto. 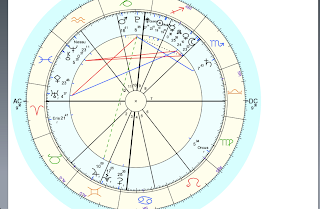 THE SOLAR RETURN
For those who didn't read the post about the angular Uranus and Pluto in the solar return, here is my solar return for 2013,  with Uranus (close to the Ascendant) square MC and Pluto (near MC) square Ascendant.
There is an interesting mix of midpoints that I may not have mentioned before:

1. Ascendant/Midheaven (AC/MC) is 141.6 degrees (22nd of Leo)
2. Uranus/Pluto midpoint is 321.6 (22nd of Aquarius)
Thus, AC/MC is exactly opposition Uranus/Pluto (AC/MC=Uranus/Pluto).
That is a confirmation of the aspect pattern.

You know that AC/MC is the most individual and personal midpoint of them all. It is the crosspoint of meridian and horizon. It is where heaven and earth, time and place meet, right where you were born. Aspects with this midpoint (see link) tell us about what is of cardinal importance. Reinhold Ebertin says (in COSI) that transits and progressions with the AC/MC midpoint signify important periods in life, defined by other factors.

- AND TRANSITS URANUS AND PLUTO WITH SUN/MOON
The solar return is not alone when it comes to Uranus and Pluto. Transit Uranus and transit Pluto hit my Sun/Moon midpoint in Capricorn in 2013/2014.

THE UPDATE
1.
I am more than half way now and something substantial changed: I quit my job. That is a revolution in my life:).
I decided to retire, exactly on the day that Transit Pluto was conjunct Mercury (see post). It was one of the many transits and progression mid July (click the link to see the other ones).

2.
Nobody died so far, but 2 women in my family, had a sudden health issue following important changes in their situation (divorce, retirement).*)
One had transit Uranus/Pluto exactly opposite Sun at the time of a TIA.

The other one had a number of transits of Pluto when she had a stent in a year of turbulance in the family and a difficult divorce. This all was mirrored by transit Uranus and transit Pluto repeatedly aspecting her Sun and Moon and Sun/Moon.

Up to now, I seem to be lucky compared to them.
(They don't have Uranus/Pluto with Ascendant/MC, by the way).

Turbulence seems to be the right word for the combination of Uranus and Pluto, when they transit Sun, MC, Ascendant, and/or Ascendant/MC or Sun/Moon midpoint. Maybe you can't help it when your world turns upside down. Maybe you impulsively did it yourself. But the result is revolutionary always. And when I see this picture mocking the French Revolution, I know that revolution involves destruction. Well, I happen to be destroying all that is useless, broken, dirty, old fashioned and over complete, following the 'instructions' in 'Coach yourself to success' by Talane Miedaner. I bought the book on a sales market (3 for 1) and I am glad that I did, cause it feels good:). Making room for something new requires turbulence. Preferably not like this: 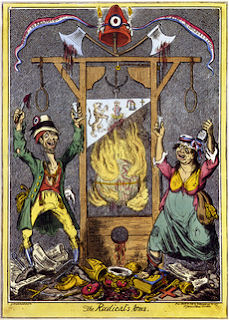 Will that be all? With Uranus and Pluto you never really know, do you? So I will update this one or two more time...

*) PS Sometimes change starts before you realize that your life will never be the same again. This is  my tweet on August 31, 2012:
"Transit Uranus exactly semisquare progressed sun and I had an alarming call today: mother broke hip."
That moment certainly changed my way of life. She never recovered completely...Since then I do her bills, exercise with her, help keeping her closets and room tidy, visit her more frequently than ever before and organize a lot...

update 2: sudden end of holidays due to acdident followed in September
See
http://astropost.blogspot.nl/2013/09/what-happened-with-transit-uranus.html