The chart of the crash and death of Randy Rhoads 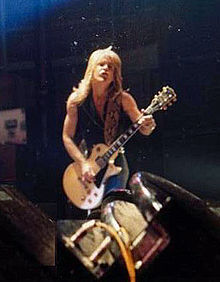 Randy Rhoads was born to be a rock star. The 'calling' Sun was biquintile his Ascendant. He played the guitar and had just begun to play in Ozzy Osbourne's band. On March 19, 1982 he was in a small plane that crashed into flames. The pilot had crashed before and was under the influence of cocaine.

Here is the chart, with transits and progressions for the fatal day: