The Fukushima disaster chart and progressions 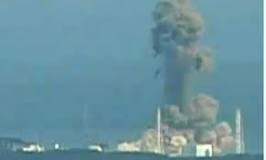 When I studied the progressed chart of the Fukushima disaster, I noticed how speedy Mercury was in those days. See the chart, and you know what I mean. There was an applying Mercury-Pluto square (nearly 5d orb) that perfected almost 2,5 days = 2,5 years after March 11, 2013. That is now, now that they communicated (Mercury) about a problem (Pluto) and danger (Pluto), that was 'born' on March 11, 2011.

I will have a special eye for applying aspects from now on to see if they have more impact later, than separating aspects have.

The Astro ID of the chart is:
- Sun in Pisces in 8th house is 'calling' (separating quintile with Pluto)
- Mars in Pisces in 8th house is 'calling' and rising before the Sun
- Neptune ruler 8 + ruler Sun and Mars is 'calling'
Sun/Neptune=Mars (Mars between Sun and Neptune)
The important Sun, Mars and Neptune sort of scream about a day when the god of the seas was at war, a day for a disaster. But the chart doesn't scream 'disaster'.

I posted about the mediocre charts of main disasters before (http://astropost.blogspot.nl/2011/02/mediocre-chart-positions-of.html ) and commented lated that there was a Pholus/Quaoar/Varuna midpoint combination in the charts of the Laki*) and Krakatau disaster. There is no such combination in the Fukushima chart, but there is a different and more complicated 'link'. There are minor and major aspects between Pholus, Quaoar and Varanu, created by Sun, Saturn and Pluto:
- In the Fukushima chart there is an inconjunct aspect of Quaoar (22d52 Sagittarius) and Varuna (21d10 Cancer), while Pholus is at 17d54 Sagittarius.
- Saturn is biquintile Quaoar and 157.5 d MC.
- Midpoint Quaoar/Varuna is square Pluto and Pluto is quintile Sun.
- The Sun is square Pholus/Quaoar and trine Varuna.
(Nessus and Sedna are also involved in this picture.)

MORE ASPECTS
An event chart requires narrow orbs, especially the orbs with MC and Ascendant. This is the chart of a special moment in time and place that had it's consequences. The minor aspects and the 'unusual' guys seem to make a difference in this chart.

The Moon is in the very first minutes of Gemini. There is an applying sesquisquare with Saturn, and that is a nasty aspect to look forward to, perfecting within a few hours on that day and within a few months in the progressed chart.
There is also a trine with Pallas, even closer.

Saturn is biquintile Quaoar. This mirrors the creation of a finale. Saturn is 157.5 d MC and that is a sesquisquare + half semi square.

The strongest aspect is that of Quaoar sesquisquare Midheaven.

In total the MC gives the tightest and strongest message.
Midheaven is trine Pluto, sesquisquare Quaoar and Juno, quintile Varuna, 75d Nessus, quintile Ceres, novile Lillith, half semi square Moon and there is the mentioned 157.5 d aspect with Saturn. The IC is quindecile Eris.

If you'd only consider the major aspect of MC trine Pluto you'd only notice an intense, challenging and dangerous moment THERE, causing stress and pressure. Such a moment happens every day, everywhere.  Here is was a moment for an earth quake, relieving stress and pressure. It takes more information to qualify the event. That shows that one single aspect doesn't tell the story...

BIRTHS IN DISASTER TIME
The aspects of charts are valid for more hours and minutes, some even for a major part of the day. Charts should be read in their context. When you were born with the above chart, you are probably someone who knows how to be in the center of attention, who can be very productive and/or very lazy (depending on what you do) and who knows how to deal with challenges and danger (simply by choosing an easy way out). It doesn't mean that you are 'a disaster':).

*) The Laki disaster 1783 chart also has Mars rising before the Sun.

LINKS
Uranus was in the last degree of Pisces when the Fukushima disaster happened. You might consider this position as 'Uranus = Zero Aries'. What happened in history? See http://astropost.blogspot.nl/2011/02/transit-uranus-return-zero-aries-and-no.html