We use to use right ascension when we read charts. Very few computer programs or books inform us about declination, parallel and contra-parallel aspects. Even less speak of 'Out of bounds'. I recently started to have a look at 'OOB's' and like to share my findings here. 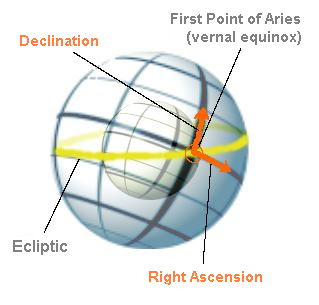 You know that the Sun moves between the Tropics of Cancer and Capricorn. In high summer, on June 21, the Sun is at  23° 26' 14.675″ (23° 26′ 16″) north of the Equator at noon in the astrological sign Cancer (and on the tropic of Cancer). In winter, on December 21, the Sun will be on the Southern tropic (the Tropic of Capricorn) at noon. The latitude for the Tropic of Capricorn is 23° 26' 14.440.
Planets, Sun or Moon can be at the same latitude (parallel) or at the point far away on the other side of the equinox (contra-parallel). A Sun at 10d North is contra-parallel the Moon at 10d South, for example.
The parallel aspect means: being on the same level. The contra-parallel means: being on different levels. Some astrologers say that the parallel aspect may be seen as a conjunction and the contra-parallel aspect as an opposition.

What does it mean to have an OOB?
OOB positions make the planet or Moon as special as a 'calling' planet (a planet with no aspects in sign or orb 5 degrees). They draw attention. With Moon it is your behavior, with Mercury your way to communicate, with Venus your style or preferences, with Mars your drive and energy (like in the chart of Usain Bolt) and with Uranus you are perhaps a bit eccentric. The OOB Pluto can be the symbol of fanatism.

Right now, Transit Mercury is out of bounds. This OOB Mercury just hit my Pluto (inconjunct aspect) and the result was a blooper. Thank you OOB Mercury!:)

Check these sites for more info on Out of Bounds:
http://www.forrestastrology.com/resources/articles/general-astrology/215-the-out-of-bounds-moon Steven Forrest schrijft hier over Out of Bounds in het algemeen en de OOB-Maan in het bijzonder
http://www.astrologykings.com/advanced-lessons/out-of-bounds-planets/