Some post were hardly noticed and deserve a second chance this summer. Now that Saturn is inconjunct Uranus, it is time for the chart of serial killer Steve Wright'. He had a Sun-Saturn-Uranus moment when he had progressed Sun opposition progressed Saturn + semisquare natal Uranus, right at the time of his conviction. Saturn-Uranus combinations are about limited freedom or breaking free.

In the natal chart we see  the dangerous combination of Venus-Neptune with Mars-Pluto afflictions. Why dangerous? Because have strange ideals about love/women and the urge to win and dominate might be a problem for some men. However, he could just have had the urge to see prostitutes. There seem to be doubts (Mercury quintile Neptune is for creative miscommunications).

and how about his chart? 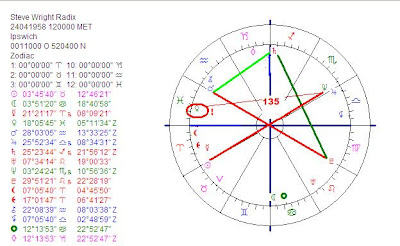 A combination of Saturn and Uranus always seems to show up in the charts of those who have to deal or finish with limited freedom. In the case of Wrigth (born April 24, 1958) it meant the start of life in prison.

Without a proper hour of birth we miss crucial factors, such as the Midheaven, the Ascendant and the degree of the Moon. In this chart of the day of his birth,  you only see Sun opposed and Venus sesqui square to Neptune (Sun-Venus-Neptune combination) with Mars oppositionPluto.

There is a prominent position for Venus (rising before the Sun and not making major aspects in sign). Venus is 'calling' and it will be hard not to notice beauty, women and desires.

This important Venus + Neptune marks a person who is probably disappointed in love life, with a special focus on women and with the tendency to force things and act with force or violence (Mars-Pluto) or to go for it no matter what. This also applies to a man who want to win no matter what and who also happens to have a diffuse love life.

Circumstances, family life and maybe genetic influences did not limit the use of strength to the golf field, unfortunately. That is what the judge thought. Watch the combination of Mars-Saturn-Pluto aspects that is often introducing the theme of unnatural death into the lifes of those born with this combination. Not necessarily because they are murdered or are murderers, of course.