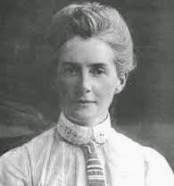 Because of the special coin with the image of executed heroic nurse Edith Cavell, I got interested in her birth chart and (even more) in the transits and progressions on the day of her execution, on October 12, 1915 by the Germans in World War I. She was born on December 4, 1865 with Sun inconjunct Pluto. She was very brave. Edith Cavell had Mars rising before the Sun. It was unlikely that she would do nothing and would not try to help. Mars is for action.

On her final day there were hard transits to deal with.

There are more aspects to be considered and there is no hour of birth available, so that her Ascendant, Moon and Midheaven can't be analyzed. In this post, I limit myself to the inconjunctions, to Uranus + Pluto and to the resonance of the natal Sun inconjunct Pluto with transit Pluto inconjunct progressed Sun.

Uranus-Pluto combinations often appear when a person is being arrested (and not vice versa!). It is a combination of an intense shock, sudden danger, ultimate change and deeply felt stress. Inconjunctions (quincunxes) refer to giving up, a loss or losing balance. She had 2 or 3 of them. Saturn inconjunct Neptune was used in her profession as a nurse. The other inconjunct is:
Sun inconjunct Pluto. That is a very difficult aspect . Sun - Pluto aspects may be challenging (see Astromarkt) but not always fatal. An inconjunct makes it harder to survive, because the person in question is no match for the danger or authority of others, at least: in times of war. You have to consider the fact that difficult aspects are harder in hard times and in difficult situations. Pluto always intensifies and stresses. With an inconjunct, it could be just too much to be able to survive in times of danger.

When the two points involved in an aspect in the natal chart are connected by means of a transit or progression, the impact is much stronger than usual. Unfortunately, in 1915 transit Pluto repeated the natal inconjunct with her Sun and she faced the challenges that she just had to face because of her nature.

http://astropost.blogspot.nl/search/label/resonance
all posts on resonance

http://astropost.blogspot.nl/2011/02/transits-of-pluto-with-sun.html on transits of Pluto