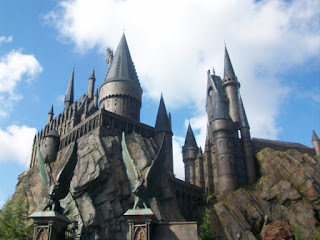 Happy birthday Harry Potter!
Daniel Radcliffe was born on July 23, 1989 and will be 22. He is already rich and famous. Unfortunately we don't have an hour of birth of Daniel Radcliffe, so that we don't even know if his natal Moon is in Aries or in Pisces. I bet that the Moon is in Pisces. That makes his Sun a 'calling Sun' (without major aspects in sign or orb 5 degrees) and that makes Daniel a 'star'!  (See the article about 'calling' planets). What is certain is, that the midpoint Sun/Moon will be in Gemini. I like this Gemini for Sun/Moon, because Gemini is the sign of youth and because Daniel 'made it' while he was (and still is) young. Here is the chart of his day of birth.

Daniel Radcliffe has Mars ' calling'  and Jupiter rises before the Sun. That means that he is an international (Jupiter) and that he might be a workaholic. The combination of Mars and Jupiter is a that of a lot of energy and drive (one of the keys to success). There are 4 placements in Leo and 3 in Capricorn. Leo/Capricorn combinations are ambitious. And did you notice that Venus is sextile Jupiter and quintile Pluto. The Venus/Jupiter/Pluto combination is great for making money and being popular.

Right now transit Neptune is inconjunct the natal Sun and that is not a sinecure. It might even be an identity crisis, now that his alter ego Harry Potter is about to vanish forever... Progressed Sun square Quaoar shows new realities and the possible creation of a new lifestyle. Transit Pholus square Mercury is reflecting a turning point in interests.

Also visit: Astromarkt.net about signs of the Sun/Moon midpoint...or for more about Sun-Neptune...
and check the labels for more background info.
Geplaatst door Astromarkt op 11:56 PM