Neil Diamond and the kiss 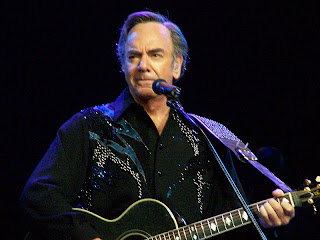 After all of those heavy criminal cases it is time for a less serious post. I want to talk about Neil Diamond's kiss and talent (and kissing talent?). The minor aspect between Venus and Neptune (105 degrees) means that underneath there is romance, always. On June 30, with Transit Neptune inconjunct progressed Midheaven a long lasting kiss with a fan demonstrated this romance, but a little out of balance (Neptune is for romance, inconjunctions lack balance). The public didn't seem to like it much (some were shocked). Neptune's inconjunctions always include negative response. And of course there is more in the chart of Neil Diamond today.

Women and love happen to be part of the deal today, when you look at the transits and progressions.

There is the Moon (symbol of needs, women and experiences).
1. With Pluto conjunct the Moon maybe there was a strong need or intense experience:)
2. Transit Node inconjunct Progressed Moon was exact and
3. still sextile Uranus for a public adventure.
I wonder who the woman was (and about her chart). Anyway, it was time for something new and it drew attention. Was it real? Perhaps. Because there is also Venus! The Progressed Ascendant trine Progressed Venus might just introduce beauty, women and love...
When there is a trine between Ascendant and Venus in the natal chart, men are attractive to women (and women are most often charming or beautiful). When the trine is in the progressed chart, it is a period of meeting nice and good looking people. In that period you are likely even more attractive and popular than ever...And he is already popular (Moon exactly trine Jupiter and Venus square Ascendant, Venus-Jupiter-Midheaven and the 'cool' Venus and Moon in Capricorn.

Have I shown the talent in the chart of Neil Diamond, yet? Probably (on Art&Astrology!), but I will repeat it here. The pattern of artistic talent in the chart is found in the MC in Cancer, the important positions of Venus (angular), Moon (rising before Sun), Neptune ('calling') and the aspects between them.

PS I wonder if the continuing pain in his back is resonating the Mars-Saturn-MC golden yod (Mars on Apex).

http://art-astrology.blogspot.com/2008/12/astrology-chart-neil-diamond.html
Earlier post about Neil Diamond on the blog Art&Astrology (about the pattern of artistic talent in charts)

Johnny Depp and links to more good looking males and their charts...

http://astropost.blogspot.com/2008/09/male-attraction-venus-saturn-taurus-and.html
About Venus in Capricorn and more 'cool' things in the charts of attractive men