Like in every summer, it is Tour de France time again. I am not fond of sports (sorry!), but even a reluctant observer like I am remembers the name of Jacques Anquetil, the man who won the Tour de France 5 times, first on July 30, 1957. Here is the chart and here are the observations about the winner in the chart. 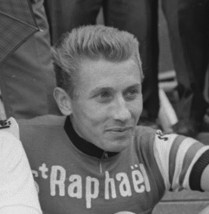 His chart has Jupiter rising before the Sun (the international, the traveller). Many bikers have Mars-Uranus aspects (they have to accelerate speed!) and so has he: Mars is in minor aspect with Uranus (75d) and in Aquarius. Mars and Uranus are in mutual reception, too.

This chart has no angularities but as AC/MC midpoint is semi square Mars we know about the importance of competition (drive, muscles, speed and energy) .

On July 30, 1957 the Progressed Sun had been trine the Moon and semi square Midheaven. Progressed Midheaven was conjunct the Sun. There was a double Sun-MC connection, highlighting the status and position. Transit Pluto square natal Sun/Moon and Chiron, with transit Chiron conjunct Saturn tell us about exhaustion and stress, too. He didn't win in luxury...but he repeated it 4 times!

LINKS
There are a number of blogs about Lance Armstrong, Bertrand, Contador, Landis and Kohl, Sun-Jupiter and doping. They tell about the charts, transits and progressions in times of competition, winning, falling down and losing.

Doping is related to Sun-Jupiter. When you want more than your body can do, you need some help to be successful...Here are posts about the Sun-Jupiter correspondence with doping cases.

COMPETITION (AND ARGUING) AND MORE ABOUT ARMSTRONG
Lance Armstrong and Alberto Contador keep arguing and wrangling...It is a matter of Mars!
http://astropost.blogspot.com/2009/07/lance-armstrong-and-alberto-contador.html

http://astropost.blogspot.com/2010/05/lance-armstrong-fell-mars-saturn-again.html
When Lance Armstrong fell hard in the Tour, there was a strong Mars-Saturn connection....

http://astropost.blogspot.com/2010/05/floyd-landis-lance-armstrong-and-sun.html
Floyd Landis accused Lance Armstrong of having used doping, too. (May 2010)

http://astropost.blogspot.com/2009/03/difficult-transits-for-lance-armstrong.html
Bad times in March 2009 for Lance Armstrong. They showed up in his chart.