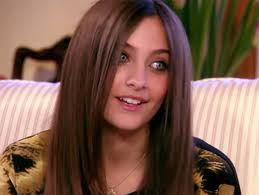 Three is an important number. It takes 3 important transits and/or progressions at the same time to mirror a major event. There are also 3 component to consider and they start with a c:
- character,
- circumstances and
- chart.
As an example: Paris Jackson. She tried to kill herself on June 5, 2013 and it was not for the first time. See how the combination of who, where and in what situation she is, could lead her into hospital.

I CIRCUMSTANCES
a. Death of famous father
Few people have the same circumstances as Paris Jackson. Paris Jackson doesn't have a common or easy life. In a lot of ways she is exceptional, starting with the conception. Her parents aren't the usual kind of parents. She is in the spotlights because she grew up in the house of the late King of Pop. The synastry between her chart and her father's shows that he almost obsessively protected his little girl. She was the apple of his eye.  His Jupiter was on her Descendant and quindecile her Sun. Now he is dead. He died during transit Saturn conjunct her progressed ruler 8th house: death (8) of a parent (Saturn).

Of course, those are only the facts that we know of...

b. Age
It is understandable that she misses her father. But there is more. She is also a teenager and therefore in a difficult period in life. She lives with her grandmother, who has strict religious rules that she is not used to follow. Katheryn Jackson's - and those of her generation's - Pluto sits on Paris' IC.  Read 'Pluto when a child is born'. It is about the stress of being a parent (and perhaps a mentor to the child).

II CHART (PROGRESSIONS, TRANSITS)
Progressions and transits give the impression of a difficult period. The present situation is mirrored by uneasy transits and progressions. The dramatic action in the chart of Paris Jackson shows like this:

1 Neptune on Progressed MC is confusing


One year ago the progressed MC was conjunct Neptune and that is very confusing. Her progressed Sun will square Neptune in a few years. She is not out of the danger zone, yet. Especially not, because Neptune is important (square Ascendant and !calling! - without major aspects in sign or orb 5 degrees). This important Neptune is pointing at sensitivity for circumstances and situations at any possible level.  Neptune has another meaning and that is 'medication'.  (That is risky, too. Some anti-depression medication are suspected to be related to suicide attempts.)

Her progressed Sun is about to change sign, which is reflecting a period of changing life style. This doesn't help much when stability is needed. Often the period of change of the progressed Sun sign is a turbulent one. It is a chance to start another way of life, however.  Maybe therapy helps her to get there.

Her Cancer Moon needs to 'belong' to a family or group of people. Her Sun/Moon is square Venus: she wants love, luxury, kindness and pleasure. The natal Moon is in the 11th degree, Venus is in a 28th degree. Transit Uranus and Transit Pluto both hit her Moon, both will hit her Sun/Moon and both will hit Venus later. What does it mean that Uranus-Pluto hits her Moon inconjunct Uranus? This inconjunct makes it worse (see Characteristics below).

Transit Uranus and Pluto are causing extreme emotional tension right now and revolutionary change in the domestic and personal situation. Uranus and Pluto are often seen in cases of arrests, when there is sudden and unexpected change in life. In a way, Paris Jackson experienced such a change. She was taken to hospital and is not allowed to leave. Uranus and Pluto cause instability and unrest. Both planets will strongly change her motivation and sympathies in the coming period of her life. Tensions, normal in a teenager's life, will be extremely strong in hers.

4. Mars 135 MC
When she cut herself, transit Mars was in the 4th degree of Gemini, sesquisquare her natal Midheaven (frustrated action  and anger)

5. Progression: Saturn instead of Jupiter rising before Sun
In the natal chart Jupiter rises before the Sun, but in the progressed chart it is Saturn. Before she looked at life on the bright side. Now she has become more serious, more worrying. The position of Saturn in the progressed chart makes Saturn's transits and progressions more important now than they used to be.

There are 3 indications of major change in life, one indication of possible depression and one (on June 5) for taking action, getting hurt.

Mars is conjunct Saturn in the natal chart of Paris Jackson. In the progressed chart Mars is now in the 5th degree of Taurus. Transit Saturn is opposition her progressed Mars now.
Mars-Saturn is the aspect of discipline, punishment and dead ends, blocked energy and restricted activities. She is in hospital.
(Again: when a natal aspect is being 'repeated' by a transit or progression, it 'sounds' louder).

III CHARACTERISTICS (BIRTH CHART)
Not every young girl who lost her father will do a suicide attempt. Paris Jackson's chart has two important features holding a risk:

1 Mars Saturn Pluto aspect combination in the natal chart; that is dangerous and warns for untimely death(s) as an issue in life.


2 Moon inconjunct Uranus in the natal chart, hit by transit Uranus and transit Pluto: that is over reaction always and extreme tension at the moment.


What is that:- A lot of upheaval?- The need for exciting new experiences?- Being rather different from the rest of their family or group, involving a loss or lost contact?


3C
With these aspects in natal, transits and progression, in her situation,  you may expect dramatic and dangerous action in times of trouble (like now).
It is the combination of circumstances, character and chart that does it. Dramatic actions don't come out of the blue because of a transit or progression. Every chart must be seen in the light of the situation, gender, genes, social circuit and culture.  Change one of the ingredients and you change the course of history...


With all that I'd almost forget to mention that basically Paris Jackson just wants peace, love, beautiful things and harmony. Her important Jupiter and Venus could be important in a 'socialite' career, for enjoying parties and having fun. Maybe one day she'll have all that...

http://astropost.blogspot.nl/2009/07/someone-pointed-at-post-on-astrologie.html
Here is the 2009 post on the chart of Paris Jackson and the death of Michael Jackson

http://www.nydailynews.com/entertainment/gossip/paris-jackson-suicide-attempt-wasn-time-article-1.1380980
NY Daily News shows a picture of an earlier scar on the wrist of Paris

On minor and major aspects:  http://www.astromarkt.net/minor-aspects.html


In the natal chart, by transit, in the progressed chart or in synastry, the aspect of Mars with Saturn means: inevitable, obligatory action or inactivity based upon duty, age, fear or caution