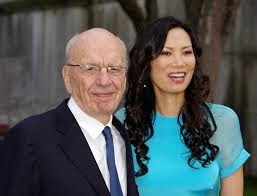 Maybe this post is a bit cynical. It is about an alleged affair that sparked the 3rd (…) divorce of Rupert Murdoch.

A 'devastated' Rupert Murdoch divorced last year after he found out that his wife had very warm feelings for Tony Blair. Tony Blair had an affair? It rhymes, but he says: no.

With Pluto opposite his progressed Sun and Uranus/Pluto midpoint semi square his Sun/Moon there is reason to expect some turbulence and stressful challenge in his life right now, still or again. Venus square Uranus in his natal chart and an out of bounds Pluto in the 5th may be a problem when you want to be true. But that is all speculations.

Rupert Murdoch has Jupiter in the 7th house and conflicts between the 1st and 7th. That is a key to divorce, anyway. He also has a 'calling' Venus and lots of money, and so he married a very young woman. It was his 3rd marriage. Tony Blair married only once.

The Venus of Tony Blair is conjunct the Nodes of Rupert Murdoch: that is good for relationships and maybe that is how they became close. Rupert's Venus is trine Tony's AS: that is sympathy again.
Saturn of Rupert is conjunct Tony's Chiron and Ruper's Chiron is conjunct Tony's Sun, a recipe for real hurt. There is also Saturn square Saturn (generational or age difference).
The Neptune of Rupert Murdoch is square the Mars of Tony Blair. That is a negative synastry.
And last but not least:
Sun/Moon of Tony Blair is quindecile the Uranus of Rupert Murdoch.
I think that that is the most devastating and disturbing interaction between their charts, because now transit Pluto hits that particular point. Transit Pluto is square the Uranus of Murdoch and in between Sun and Moon of Tony Blair. What Rupert Murdoch says now, will of course damage the family life of Tony Blair. There is no solid proof of any affair, however and Blair denies it.
This synastry aspect shows me that it is good to check quindecile (165 degree) aspects with Sun/Moon (or AC/MC or any position) in future.

Wendi Deng's Sun (December 8, 1968) is inconjunct the Sun of Tony Blair, signifying attention in an disproportional way (and the risk of loss). His Venus was (…) trine her Sun and her Jupiter trine his Mars. That is OK for liking each other. However: their Moons never matched and neither did their Venus (Aries-Capricorn). They were worlds apart in many way.

Rupert and Wendi weren't the perfect match, either. Their Suns didn't match (Pisces for him, Sagittarius for her) and their Moons neither (Sagittarius and Cancer). Mercury square Mercury doesn't help communications much. Venus Aquarius for him and Capricorn for her (but septile, so they managed to like each other). Her Mars in Libra square his Pluto in Cancer might have been a problem, too, but most of all her Venus opposite his Mars…that is for questionable passion. The fact that there is Venus-Mars says that there was sexual attraction, but the opposition often separates.

So all is well that ends, well…except for the upheaval, that is:). However, there is also a Cherie Blair, with her Sun quindecile Tony's Venus and her Venus opposite his Sun. Will long-lasting love win in the end?

LINKS
http://oxford-astrologer.blogspot.nl/2013/06/rupert-murdoch-clobbered-by-u-plu.html
The Oxford Astrologer on the divorce last year