ASTROLOGY AND THE YAHOO CASE 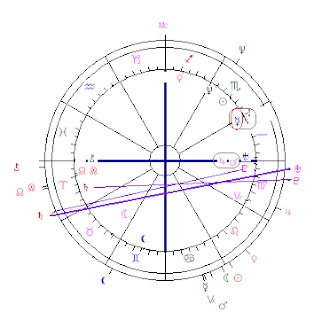 Yahoo, in person: the manager for China Jerry Chih-Yuan Yang, has been criticised by the American Congres for being "at best inexcusably negligent" and at worst "deceptive" in the case of giving the names of a Chinese dissident to the Chinese government. Shi Tao is the victim of that act and now in prison for 10 years. Yahoo promised to do it better next time and settled with Shi Tao, probably he got a sum of money to look forward to. In their charts you see the lines for disadvantages of politics and gain (Saturn-Pluto) and in the progressions you see how unfortunate the interaction between Shi Tao and the company of Chih-Yuan was. It happened when Saturn-Uranus (limited freedom) became a theme in the progressed chart of the manager. And it already was a theme in the birth chart of Shi Tao...

The birth chart of Chih-Yuan Yang is dated November 6, 1968. Watch the indications for a succesful manager! Notice Mars conjunct Jupiter, both semi square the 'calling' Sun. Mercury is the oriental planet in this case. Mercury is prominent, because Mercury is 'calling', just like the Sun. Mercury is the planet of communications. Now we have the combination of a leading figure and communications. And that fits. The importance of making more money is visualised in the square of Venus in Sagittarius with Pluto.
On the day Shi Tao was arrested there were several difficult aspects and transits in the chart of the manager of Yahoo China. The most important for this case is the transit of Uranus, making hard aspects with the progressed Saturn and Uranus. Saturn-Uranus is the combination for limited freedom. Saturn and Uranus made a semi square aspect in the progressed chart of Jerry!

In the birth chart of Shi Tao (25th July 1968) Saturn is inconjunct Uranus within one degree of orb. When he was arrested (24th November 2004) Uranus was inconjunct the natal Sun and sesquisquare Mercury.

The picture above shows the positison of Chih-Yuan Yang with those of Shi Tao wrapped around them. Interaction between the charts is done by Pluto and Saturn. Tao's Pluto is inconjunct Jerry's Saturn. Jerry's Pluto is inconjunct Shi Tao's Saturn. This indication for hard confrontations and heavy difficulties showed the disadvantages (Saturn) of all that Pluto 'stands for': politics, power, money, influence and authority.
Geplaatst door Astromarkt op 10:56 AM

Get Your Personalized Astrology Reading and The "Practical Astrology" Book Now, 100 % FREE.