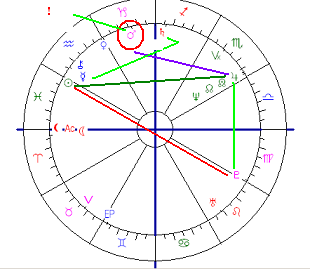 John Rishton is the new CEO of the Ahold concern. Before he was the chief financial manager of Ahold.

On the day that John Rishton was born, 21 February 1958, there was a lot of self confidence in the air:) Sun opposed to Pluto and trined Jupiter. Jupiter wsa sextile Pluto. And the midpoint combination Jupiter/Pluto opposed to >Zero Aries. Notice how Venus is square Jupiter and inconjunct Pluto. That combination tells us there is a lot of financial growth (but with a discrepancy somehow) or that he will succeed (Jupiter) in financials. The most narrow aspect that will be made in the birth chart of John Rishton is that of Mercury sextile Saturn, a garanty for being strict with figures.

On FEM Business it is said that Rishton has a strong will (Sun opposed to Pluto...) and knows how to act and deal with things. He has the Moon in the do-sign Aries and Mars is very prominent. Mars, the planet of action, is oriental (rising before the Sun), not aspected (I say: calling!) and in a creative quintile with Jupiter. That is a key for creative and right decissions!

At the moment Rishton has transit Jupiter trine the progressed Sun (for progress in life) together with transit Saturn sesqui square the progressed Sun (for frustrating responsibilities). In the solar return chart for 2008 Rishton has Sun square Jupiter. Should the growth and prosperity of Rishton also be growing results for Ahold? Time will tell...
Geplaatst door Astromarkt op 12:56 PM

Email ThisBlogThis!Share to TwitterShare to FacebookShare to Pinterest
Labels: Business