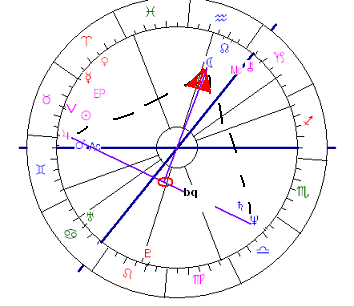 A message for sundays:

In 'The Blair Years' Tony Blair says that faith was important for the way he acted, but that he was afraid to show this to the outside world.

Given this fact it is interesting to see that Jupiter is in the twelfth house. Jupiter is connected with the conjunction of the retrograding Saturn and Neptune by biquintile (being creative with the limitations of faith). Wit the prominent Moon rising before the Sun in the ninth house of international contacts, travelling, development and convictions, Tony Blair just needs to believe. This Moon is making a midpoint yod with Jupiter/Neptune.

A midpoint yod points at an important spot in the birth chart. The distance from that point (the apex) to one of the other points of the combination is as large as the distance is to the next point. In the case of the natal chart of Tony Blair we see that these points (Jupiter and Neptune) form a biquintile, too. That makes a very strong combination

It is pleasant for the astrologer that the prominent Moon also symbolises females. His wife is a roman catholic and there is a long lasting rumour going around that Tony Blair plans to become roman catholic as well.
Geplaatst door Astromarkt op 12:42 PM