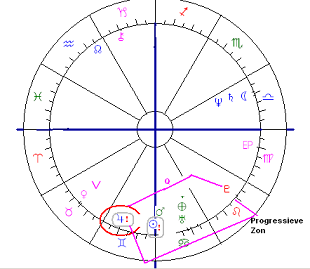 Benazir Bhutto was born on June 21, 1953 and looks still young. Maybe that is because her Ascendant is in Gemini, but I cannot be sure without her hour of birth. In the birth chart of Bhutto there is a Sun in Gemini and Jupiter is rising before the Sun, also in Gemini. Moon is in the estetic sign of Libra and Venus is strong in Taurus, semi square Zero Aries and sextile (wide) Uranus. That is what we see on tele, a representative and young looking female.

There are two good reasons for her prominence.
1. The Sun is square Zero Aries on her birth day. The Sun does not make major aspects in sign. That makes her a leader!
2. Jupiter does not make major aspects either and rises before the Sun. That makes Jupiter the most prominent planet in her chart (being oriental and 'calling'). Jupiter is the planet of the international. In a way she was forced to be an international by being banned.
Jupiter is quintile Pluto and semi square to the midpoint Sun/Pluto. Jupiter is also semi square Mercury. This combination points at the talent of speaching. Another indication for the role of communicating is the amount of placements in air signs (50%). Mercury however is heavily afflicted by Saturn and Neptune. Such a Mercury was seen before this week in the chart of the genious child who was tought at home. So was Bhutto and that is limiting the contacts in her youth. Limited communications are also there because of house arrests and the fact that she is deaf on one ear. Still, she is self confident and that is the positive effect of the combination of the prominent Sun and Jupiter!

Bhutto is leading the opposition in Pakistan. She has a lot of followers now and that success is being translated astrologically by the transit of Jupiter trine her Pluto and by the quintile that the progressed Sun makes with Jupiter, on her way to Pluto. There is a combination for successes made by the Progressed Sun conjunct Pluto and both quintile Jupiter. As Pluto is the planet of the (prize and value of) sex, money, power, influence and politics...this will not be without danger.
Geplaatst door Astromarkt op 10:28 AM