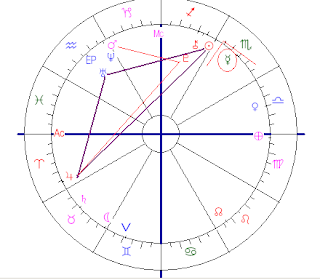 Ainan Celeste Cawley is a genious and a child born in a family of gifted children. He was born 23 November 1999 in Singapore. Here you see the chart drawing for noon on his birthday .
His parents are searching for a university to make this 7-year old an academic before he will lose interest in learning. Soon transit Saturn will square the progressed Sun. Within a few years the progressed Sun will conjunct Pluto. These are no easy pjrospects.

Where in the birth chart of Cawley is the genious? I think his individual natal chart (including birth time) makes the difference (like his parents do, see the blog of the mother). Still there are indications. There is a golden yod, there is a three fold midpoint combination for successes and there is a prominent Mercury (planet of knowledge and youth).
MERCURY
Mercury is ahead of the Sun AND sesqui square Zero Aries. That makes Mercury prominent. As Mercury is afflicted by Saturn and Uranus, I doubt that he has a happy childhood being so special.
YOD
There is a so called golden yod build by quintiles and biquintiles between Sun, Jupiter and Uranus. Such a connection indicates a succesfull view (of the future) and quintiles are for creative talents. We could read this golden yod as that of a person who is ' his time ahead'. (Notice that all astrologers that I know of have a combination like that in aspects or in midpoints).
SUCCES COMBINATIONS
We see three times the midpoint combination of Mars with Jupiter and Pluto: Mars 22.5 Jupiter/Pluto, Jupiter 112.5 Mars/Pluto, en Pluto 90 Mars/Jupiter). We notice the hard aspects between Mars and Jupiter and between Jupiter and Pluto. They confirm the midpoint combinations and show a great potential and energy.
Geplaatst door Astromarkt op 7:30 PM