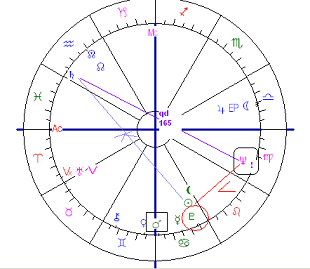 Darlene Conley was Sally Spectra in The Bold and the Beautiful. This week is was announced that on the 12 th January 2008 there will be a benficial gala in memory of Darlene, organised by stars of the soap serie. It will be one year after the day she died, then. On that day transit Neptune opposed the progressed Mars. And both planets are prominent in her birth chart. The circle is round...

Darlene was born 18th July 1934 in Chicago (source Wikipedia*). Pluto is oriental, conjunct the Sun; Mars in the sign of the stomach, Cancer, square Zero Aries and important because there are no placements in fire signs. At first sight you would notice a strong personality only. But then you may notice that Neptune is 'calling' and Neptune is for acting, a.o. The Moon in Libra represents the need for 'Beautiful' and the prominent Pluto refers to 'Bold':)

*) Astrothème says she was born in 1942, but all over the net it is said that Darlene died age 72 and that the cause of death was stomach cancer. There is no hour of birth available.
Geplaatst door Astromarkt op 4:08 PM