This is the true chart: 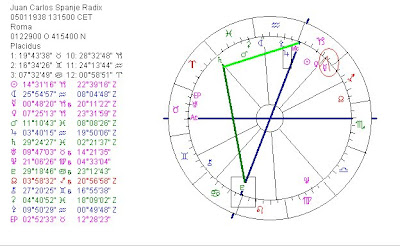 This is the chart that was mentioned, too: 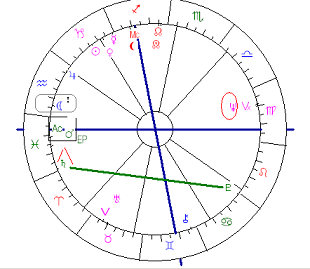 and that I read first...

THE A.M. CHART
The king of Spain, Juan Carlos (05011938 092000 GMT Rome, source Astrolab)
told the president of Venezuela yesterday to shut op. Hugo Chávez kept calling the former president of Spain, Aznar (born 25th February 1953, 7 a.m., Madrid, source Astrothème) a facist. The king however has his Jupiter sextile the MC of Aznar and Aznar's Jupiter trines the royal Sun. That is an indication for mutual support.

The charts of Chávez and Juan Carlos have a perfect interaction of Mars and Uranus (for the 'explosive' situation). Chávez has Uranus rising before the Sun. Juan Carlos has a prominent Mars on the Ascendant*) (and no placements in firesigns. They share an aspect between Mars and Uranus. And Mars of Chávez is sesquisquare the Uranus of the king. That is what creates a 'riot'.

In his birth chart Juan Carlos has these prominent positions:
- Saturnus prominent on Zero Aries, so that he is known for being the heir and/or for being reserverd and respected.
- Saturn trines Pluto (perfect): a harmonic relationship between concentration and focus, being a 'die hard' (also for yourself) and having control.
- The element fire missing: this can suddenly 'light up'fire.
- Mars prominent on the Ascendant: a man of action if needed.
- Moon in Aquarius calling; involvement and emotions at any level (mostly behind the scenes or screens).

This 'astrological I.D.' once made him stop a revolution before it really started. Juan Carlos mostly has everything under control, but...not all the time:)
Yesterday Transit Saturn opposed the Ascendant (conjunct Descendant): someone caused disadvantage. Pluto opposed Chiron (a hurtfull challenge). Progressed Mars sesqui square MC made the will to act in public rather strong. Primairy Sun was squared by Mars and that lighted the fire. And...the Pluto of Chavez was sitting on the progressed IC of Juan Carlos: a challenge again.

Read more about meetings seen in an astrological light

The 13h15 chart is above on top! Notice that the patern changes (or not) as follows:
- the Moon is still calling (not making Ptolemeic aspects in sign or orb 5 degrees);
- that Jupiter and Pluto are crucial now (and that is a statement of succes);
- Mercury is oriental for the messenger;
- Neptune moves from the 7th to the 5th house and remains 'calling' for idealism and religion or romance...at any level;
- Saturn trine Pluto (a harmonic relationship between concentration and focus, being a 'die hard' (also for yourself) and having control) remains the most tight combination
- the element fire is still missing

The unaspected Moon and Neptune might point at feelings of empathy and commitment at any possible level (up and down) and could also refer to the affairs that he had (Neptune in the 5th). Important is the placement of Pluto conjunct the IC, in connection to the way he was welcomed by his mother, the fact that he grew up in the house of the dictator Franco and the influence of politics on his position. And perhaps we might see the Ascendant in Taurus as an explanation for the fact that he loves watching bull fighting? Recently there was upheavel about the fact that he catched the hat of the matador in an arena...