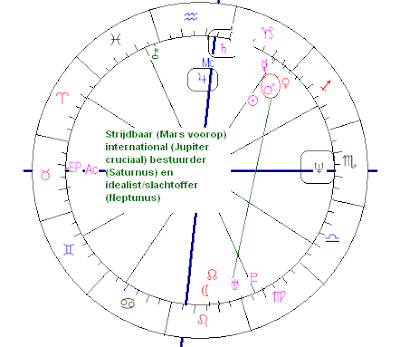 A video of Ingrid Betancourt shows her alive but not too well as a prisoner of the Colombian Farc. Neptune is now semi square her natal Sun (indicating the media and for her situation) and transit Uranus is semi square Saturn with Pluto sesquisquare her Ascendant. This symbolises stress. There are little signs of hope, like Transit Jupiter conjunct Venus and trine het Moon, on the Ascendant. The progressed Moon trines Venus. Those use to be prosperous aspects indicating love, support and hapiness in the family. In her chart Jupiter rules the eight house. It might be the reason why even the Progressed aspect Sun conjunct Jupiter did not improve her situation. But it also might be, that for people in prison and/or those who cannot act as an individual in freedom (like many women all over the world), the progressions and transits should be interpreted with an addition: 'considering the circumstances'...

This is what I wrote on 16th August 2006 about INGRID BETANCOURT:
" Planet Internet (www.wxs.nl) has an item about the Colombian candidate for presidency who was kidnapped over four years ago: Ingrid Bétancourt. She is born 25th December 1961 in Bogotá at 14h15 (according to Astrotheme.fr).

What is in her natal chart?
She is realistic, earthbound, ambitious and aware of status with Saturn peregrine and strong in own sign of Capricorn. She also has the combination of Sun Capricorn and Moon Leo. She is a warrior (Mars is oriental). She mentioned once that her children are proud that she is doing this, this fight against drug criminals.

Radical living
Ingrid Bétancourt did not choose an easy family life with children and a dear husband. She was a member of parliament and a candidate for presidency in Colombia. The fact that this had a negative influence on her private life is seen in the aspects of the Moon square Neptune and opposed to the MC. Her vocational routing is through Aquarius (making the world a better place). Uranus. Mercury. Saturn*. What has politics got to do with this? Pluto trines Mercury. The combination Mercury, Saturn, Pluto is often seen with politicians (strategic minds, like the USA presidents).
There is a stellium in this chart of Sun, Mercury, Venus and Mars in the eight house of crises, life and death. And in her fourth equal house Moon is there with Uranus and Pluto, the radicals. She was born in Columbia, emigrated (to Paris) and came back. Uranus and Pluto in 9 or 4 indicate radical changes and often come backs.

Nobody knows how she is now: Neptune!
Neptune on the descendant for disappearance, idealism, ideology and …drugs. All Neptune related items are prominent in this chart, due to others (descendant!).

Kidnapping: the progressed chart
At the time of her disappearance, 22nd February 2002, transit Pluto squared progressed MC and transit Jupiter ruler 8 was inconjunct the natal Midheaven. This happened right after a transit of Neptune across Saturn and MC and just before Neptune was to join Jupiter.
Meanwhile the progressed Sun is getting closer to a crucial conjunction with progressed Jupiter. Normally this is a prosperous aspect. But in this chart Jupiter rules the 8th house of life and death. That is why in this case the Sun conjunct Jupiter progressive aspect (perfecting in November 2006) might even mean the announcement of her death. Jupiter is the planet for publications and up to now it were problems that made her a world wide celebrity.

In the drawing above it says that Jupiter is for the international, Mars oriental indicates her activity, Saturn near the MC and unaspected is showing her ambition to be a member of the government and Neptune is there for idealism and - in this case- for being victimised.
Geplaatst door Astromarkt op 3:58 PM

Great analysis.
I find it fascinating that both her strive for political power (Saturn theme) and her idealism (affected Neptune)can be so clearly seen in her chart.

Did you try looking at the planetary aspects the day she was kidnapped?

Thank you Nicole. You see the transits and progressions for the day she was kidnapped in this post (Kidnapping: the progressed chart:)