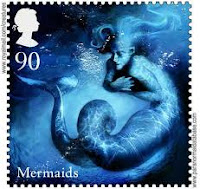 This post is about the special position of Sedna in the chart of Princess Märtha Louise of Norway. Sedna is a deity who was given up or sacrificed by her father in order to keep the sea monsters calm. Sedna is a planetoide, not a dwarf planet, because it is not certain if her shape is round like the shapes of planets. She is now positioned at 22d30 Taurus. In the chart of the Princess, Sedna is opposition her Moon and square her Ascendant.
(Astrology Weekly gives an official time of birth of 17.07 LMT for Princess Märtha Louise of Norway, born September 22, 1971 in Oslo. )

Why a post about the Norwegian Princess? She is hot news today because of the publication of her book about 'talking with spirits'. See the news...Before she wrote this book, she used to run classes for talking with angels. Religious persons in her country are upset. That is perfectly mirrored by the transit of the planet of upheavel, Uranus, opposition her natal Sun.
All bad things come in three: transit Saturn is opposition the progressed Moon and conjunct natal Venus. That is perhaps limiting joy. She has Jupiter opposition progressed Sun soon for a success with question marks.

Continue for the  chart and for more about Sedna, the myth and the possible modern reflection of Sedna. The controversy about the Princess's business caused the King to make her less royal...
For some reason I included Sedna and Ceres in the natal chart and I immediately noticed the special positions. When you are a princess, family matters. That is why Ceres (symbol of genes) is on the Descendant. Sedna is exactly square the Ascendant and opposition the elevated 'calling' Moon in Scorpio. Sedna is the deity of marine animals and mermaids, the goddess who was sacrificed or killed by her father. I read on Wikipedia:

In 2002, the King (with Princess Märtha Louise's consent) removed Princess Märtha Louise's style of Her Royal Highness and instead styled her as Her Highness (this title is not used in Norway). This was meant to loosen connections with the Royal Family and her business life. However, she retains her title as a Norwegian princess and her place in the line of succession and still carries out royal duties on behalf of the King (though they are reduced).

Her father and/or the government don't seem to approve her business life (the angels and spirits, folk tales and singing).That is why she is no longer 'royal', even though she is still the daughter of a king.
It is a soft version of a Sedna-like story...

Her story reminds me of Princess Irene of The Netherlands, who wrote books about talking to trees and communicating with dolphines (living and natural creatures). She has Sun binovile Uranus and might enjoy being somewhat controversial. Märtha Louise has Sun 15d Uranus. A Sun-Uranus connection sometimes shows enstrangement (see the label 'sun uranus' for more examples).

This is the chart drawing, with transits and progressions:

YOU AND CERES
When Ceres is of importance in your chart, family matters, motherhood, nutrition, genes and being an heir or heiress might be significant importance. See the label 'Ceres' for more examples.