Jupiter in Pisces, John Henry Newman and the Pope 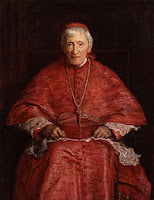 John Henry Newman was a man of religious courage in his days. When he became a roman catholic he lost his job and the contact with one of his sisters. That is not the reason for beatification by the Pope today. His theological works are important and it seems that he did two miracles. See the news..That is enough to become holy (a saint) in the Roman Catholic Church.

Jupiter in Pisces seems to be important in this case. It is interesting how the important 'calling'  Jupiter in Pisces (sign of Christianity) of Newman is reflecting the importance of his faith and religion. When Jupiter is calling, travelling and conviction are of extreme importance, at any possible level. The Pope also has an important Jupiter in Pisces (see yesterday's post). When I noticed that in synastry the Jupiter of Newman is in aspect with the Sun and Midheaven of the Pope, I asked myself for the xxth time: who benefits from who when Jupiter is part of an aspect in synastry?
You see, the charts don't show it, just as the chart doesn't clarify who is the victim and who is the actor in a Mars-Pluto conflict. The prominent 'calling' Jupiter  of Newman is square the Sun of the Pope and inconjunct the Midheaven of the Pope.
The progressed Sun of Newman was   sextile natal Jupiter in the past months preceding the beatification, with transit Pluto sextile his natal Sun. That progressed Sun of Newman is now in the 26th degree of Virgo, inconjunct the Pope's natal Midheaven.
BTW The progressed Sun of Newman was trine Jupiter when he became a priest in 1825. Continue for the chart of the Pope and (in green) the positions on the day of birth of John Henry Newman and for links to more posts about religious devotion, popes and the sign of Pisces....

MORE NEWMAN
Newman's Uranus is inconjunct the Sun and that is a statement for enstrangement (like when you become a catholic in an anglican environment in the 19th century). The biquintile with Jupiter and the conjunction with Pluto is for success (he became a Cardinal).
There is also a Venus-Mars-Pluto aspect combination that shows intense passion (and the problems involved).  Mars trine Uranus is often there where men join forces as a group or where there is a 'community of men'.

LINKS
This is a link to a post on this blog about Pisces, the sun sign, the moon sign and the planets, Ascendant and Midheaven in Pisces:
http://astropost.blogspot.com/2008/04/pisces-sun-sign-pisces-moon-planets.html
Quote about Jupiter in Pisces:

Strong position of Jupiter still, this "believe in miracles and providence". Somehow with this position you have a lot of fantasy or endless luck and dreams might help you solve problems.

Badly aspected you are overly tolerant or religious and might become a hermit (but a happy one and accompanied by a dog).

(And apparently, when Jupiter in Pisces is prominent, religious devotion has a special place in your chart/heart*).
http://astropost.blogspot.com/2010/09/chart-of-pope-and-visit-to-uk.html
Yesterday's post about the visit of the Pope...
The ruler of Pisces is Neptune. The Jupiter-Neptune combination is strongly involved with the charts of religious people and all those who have fans and followers. See the article about Jupiter-Neptune.. or go to the article about the charts of popes on Astromarkt...