Chart of the Pope and visit to the UK

The Pope is visiting the UK. This is the chart of Pope Benedict with today’s transits. 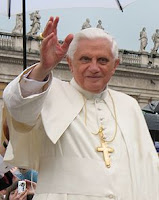 A dwarf planet and an asteroid hold important positions on the angles of the chart: Quaoar and Ceres. Quaoar square Ascendant might show new horizons for the Pope (and his church). Transit Quaoar, the symbol of creative new realities, is on a hot spot, on top of his natal chart, square the Ascendant, reflecting the event of yesterday. Transit Quaoar is trine his progressed Mars. And with the symbol of the roots and motherhood (Ceres*) is right now on his Midheaven we see the importance of ‘family’ (and perhaps in the situation: the mother church). Ceres is semisquare the crucial midpoint AC/MC in the Pope’s natal chart. (See the links below.)
This visit to the UK is a historic visit. What happened was, that for the first time in 500 years the Pope of Rome set foot in an Anglican cathedral and he stood there together with Archbishop Rowan Williams (see the post about his chart and the upheaval around him in 2008) . It was a moment of importance for the churches of Rome and London. For the backgrounds, read the Telegraph about it…

Transit Ceres and transit Quaoar in contact with the angles of the chart are mirroring a sort of a creative recipe. Time will tell what the result of the cooking will be…and meanwhile it is red hot in the kitchen. With Pholus in Sagittarius this is apparently the time for a turning point for religions and convictions in general with the risk of ‘shooting own feet’.

The journey to the UK is being reflected by the transit of Jupiter and Uranus conjunct natal Mercury. Jupiter-Uranus is the ‘Thank God’ (relief) combination of positive change (for the person involved). Uranus might be mirroring the controversy about the visit and the upheaval about the arrest of a group of terrorists planning an attack during his visit. The combination of Mercury and Jupiter is in general the combination of travelling (abroad). Mercury is reflecting transportation and Jupiter is the planet of the international. In the natal chart of the Pope, Jupiter is in Pisces and on the Ascendant.

For more about the Astrological ID of the Pope and links to earlier posts about him, continue…

LINKS ABOUT THE POPE
CNN scheduled a program about what the Pope did or did not know about the sex abuse (see news here… ) And of course there were also protests against the Pope and his church with signs like ‘Time for God to step down’. The problems were reflected by difficult transits before.
http://astropost.blogspot.com/2010/03/pope-benedict-and-difficult-transits.html

*) About Ceres and the chart of Pope Benedict: cherchez la femme in the chart of the Pope:)
http://astropost.blogspot.com/2008/07/female-in-chart-of-pope-now-that.html

http://astropost.blogspot.com/2008/04/pope-and-his-birthday-chart-travelling.html
Pope Benedict travels a lot. Where is the international in his chart? It is in his Astrological ID. I quote the post:

In his birth chart (see image on top of this message) you see the 4 most prominent planets.

1. Benedicto: the blessed one

Jupiter is calling on the Ascendant in Pisces and disposing of the Midheaven: to travel and to convince at any possible level as part of the way he presents himself ...seems clear to me:)

His name is 'Benedicto', the blessed one. The ascendant (the way you present yourself) together with Jupiter (symbol of succes and being blessed)...Do you see it, too?

Mars conjunct IC and square Aries Point; for work at the background or an industrial family or for the reputation of being active. He insists on having a hugh walk in the garden every day!


3. A long life
Uranus oriental in the first house conjunct Aries Point: that is one of the advantages in a chart when you wish to get real old. Is not it funny that people spoke of him as an 'interim-pope' because of his age at the moment of his inauguration? In my book Astro I.D. I give some examples of people who got real old and had Uranus rising before the Sun (= oriental).

4. Last but not least: the conservative one
Saturn is important two times: Saturn is on top, and Saturn is calling!: ambition, management, but why don't you look at it this way: PAPA!

PS A calling planet is a planet without major aspects (like trines and squares) in a 5 degree orb or in sign. Follow the labels for more information.